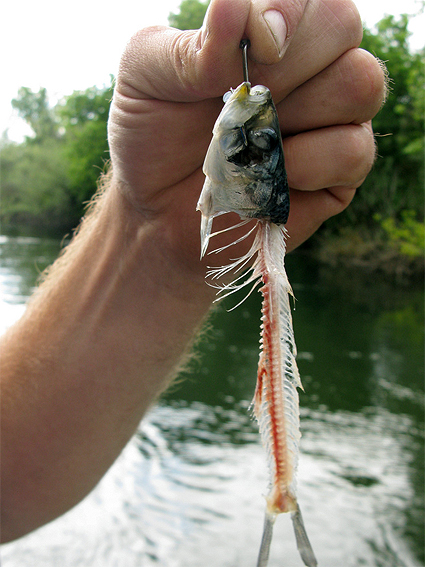 Baitfish are known as a large group of fish whose claim to fame is that they provide an important food source for other fish. There are at least 50 species of baitfish worldwide that include herring, shad, anchovy, and sardine. Many species are harvested for a variety of products such as fishmeal, oil, pet food, fertilizer, and of course bait.

The Pacific sardine (Sardinops sagax), partially displayed in this photo, is a small schooling fish that at times has been the most abundant fish species in the California current, spanning from the tip of Baja California to southeastern Alaska, and was once the largest fishery in North America. Peak landings of 664,000 MT occurred in 1936 and fell to less than 10,000 MT by 1965. The population did not begin noticeably increasing until about 1980, and, according to information available through 2008, had been growing at about 30% per year for the previous 15 years. This recent population growth led to an increase in the sardine fishery off of California and Mexico. Live sardines are often used as bait for marine fishing along the Pacific Coast and frozen sardines are used by anglers seeking to catch trophy striped bass in inland waters.