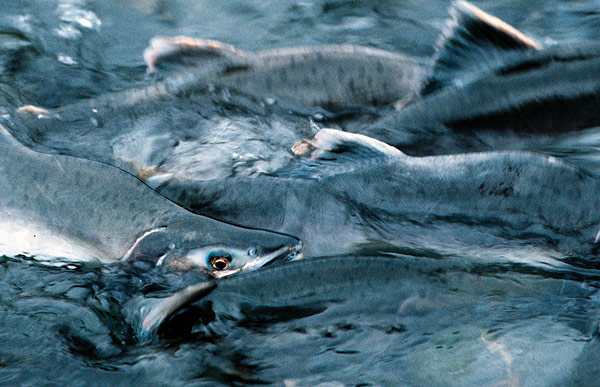 As the year comes to a close, so does the 2011 fall-run Chinook salmon spawning season. Central Valley tributaries are experiencing an increase in the number of salmon migrating upstream from the Delta this season. The increase is a positive sign for the future of the salmon, but this is not the whole story. Last year we reported that we were observing higher than normal counts of adipose fin clipped (ad-clipped) salmon and this year, at least in the San Joaquin Basin, we are again seeing higher than usual ad-clipped fish. Due to the Constant Fractional Marking Program (CFM), we expected that the number of observations of ad-clipped salmon would rise, reflecting a higher proportion of ad-clipping at hatcheries. However, we were puzzled at first over this year’s numbers, until we read the 2010 CFM report. Unlike previous years, every salmon that was released from the Mokelumne River Hatchery in the spring of 2009 and 2010 was CWT and ad-clipped, and according to the CWT database the majority of the fish were released into the San Francisco Bay. According to the recent Hatchery and Stocking Program Environmental Impact Report/Environmental Impact Statement (2010) Mokelumne River fish that are released into the Bay show a high propensity for straying. The report describes an independent assessment of straying based on coded wire tagged hatchery fish released between 1987 and 2007, which found that among other tributaries, 15% of the bay released fish strayed to the Stanislaus River and 11% to the Tuolumne River. Coded wire tags collected over the past few months during DFG carcass surveys will be examined to determine the source of the stray hatchery fish in 2011 in the Stanislaus and Tuolumne.

San Joaquin River Basin
In the San Joaquin River basin, the Tuolumne River salmon run continues to climb well above the counts recorded in recent years. Passages are recorded by a Vaki Riverwatcher fish counter at the Tuolumne River weir (2,646 as of 12/4/11; Figure 1). The Stanislaus River weir installation was delayed this year due to high flows, but the weir was finally installed on November 8. As of December 4, a total of 682 salmon have been recorded, which is already greater than the entire run (n=408) in 2007 (Figure 2). On the Mokelumne River, passages to-date for 2011, as recorded by video monitoring (18,102 salmon as of 11/29/11), continue to steadily climb (Figure 3). 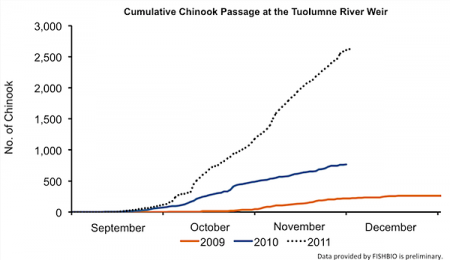 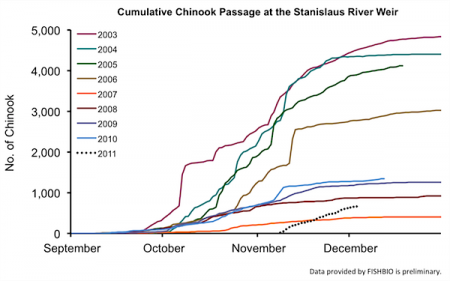 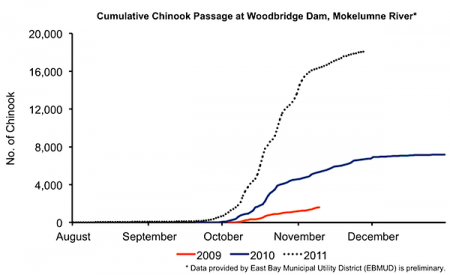 Sacramento River Basin
The Battle Creek net passage count of fall-run Chinook has fluctuated since the last update but, due to salmon migrating upstream and down, has remained relatively stable at 24,892 (as of 11/21/11; Figure 4). 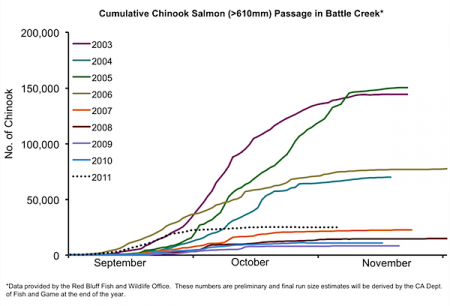 It has come to our attention that the data previously presented for the year-to-date fall-run Chinook passage on the Yuba River unintentionally misrepresented the passage data available from their website. Data from 2007-2009 was incomplete, and counts during all years may have included individuals from overlapping Chinook runs (i.e., spring, fall and late-fall runs). For more information regarding the Yuba River passage data, please see the annual reports available online at: www.yubaaccordrmt.com.

Russian River Basin
Passages within California’s own Russian River continue to rise. As of November 30, salmon counts at the Mirabel Rubber Dam are higher than they have been since 2006 (n=3,084; Figure 5). 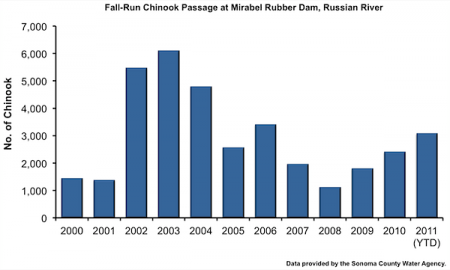 Columbia River Basin
Further north, at Bonneville Dam on the Columbia River, the fall-run Chinook season has come to an end for 2011. This year, 401,576 Chinook salmon (as of 11/15/11) have been recorded passing the dam, which is consistent with the average for the last ten years (Figure 6). 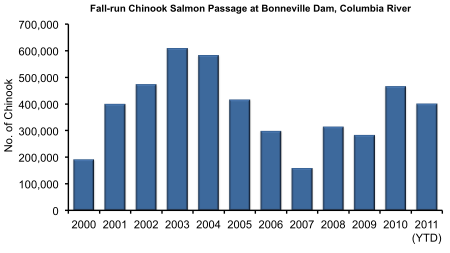 Fall-run Chinook salmon counts are definitely moving in a positive direction in 2011, but the increase in marking efforts and observations have demonstrated that a troubling proportion of the run consists of fish that originated from a hatchery. Even low levels of hatchery straying can reduce genetic and life history diversity and jeopardize the viability of the populations (Lindley et al. 2007). The fact that so many salmon in the Central Valley are of hatchery origin is a sign that despite the recent gains, there should still be concern over the future of the Central Valley fall-run Chinook.