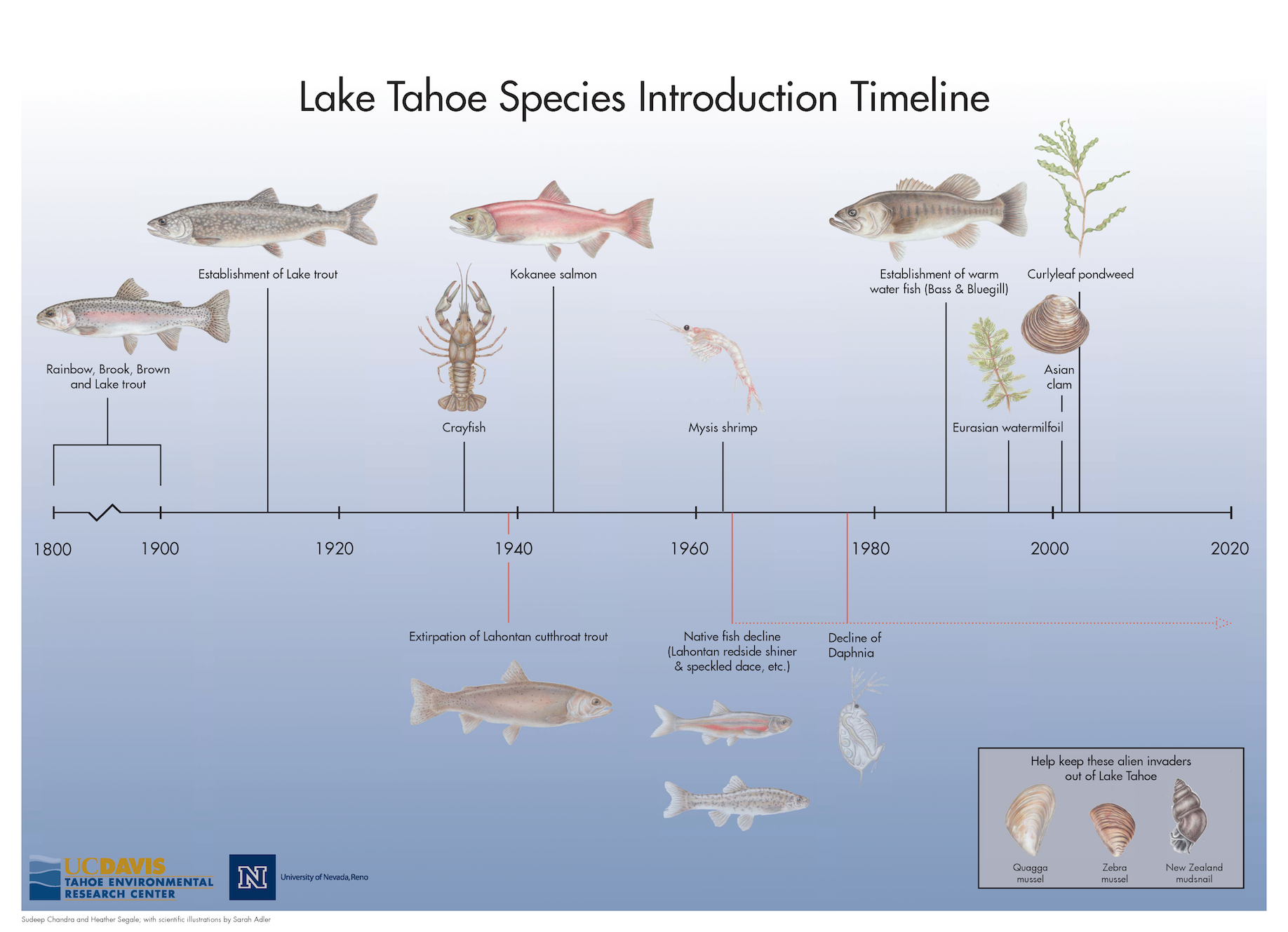 While Lake Tahoe is famous for its clear blue waters, the ecosystem of the lake is far from untouched or pristine. Stocking and unintended introductions of non-native species over the last 100 years have completely transformed the aquatic community and food web in the lake. Non-native fish stocking dates as far back as the late 1880s, when rainbow, brook, brown, and lake trout (also known as mackinaw) were all stocked in the lake for recreational fishing. Lake Tahoe was once home to the leviathan Lahontan Cutthroat Trout, which can grow over four feet in length and up to 40 pounds, and acted as the top predator in the lake. However, heavy commercial harvesting during the Comstock mining boom, watershed degradation from logging and grazing, and the introduction of voracious lake trout and brown trout all led to Lahontan Cutthroat being completely wiped out of Lake Tahoe in the 1930s. 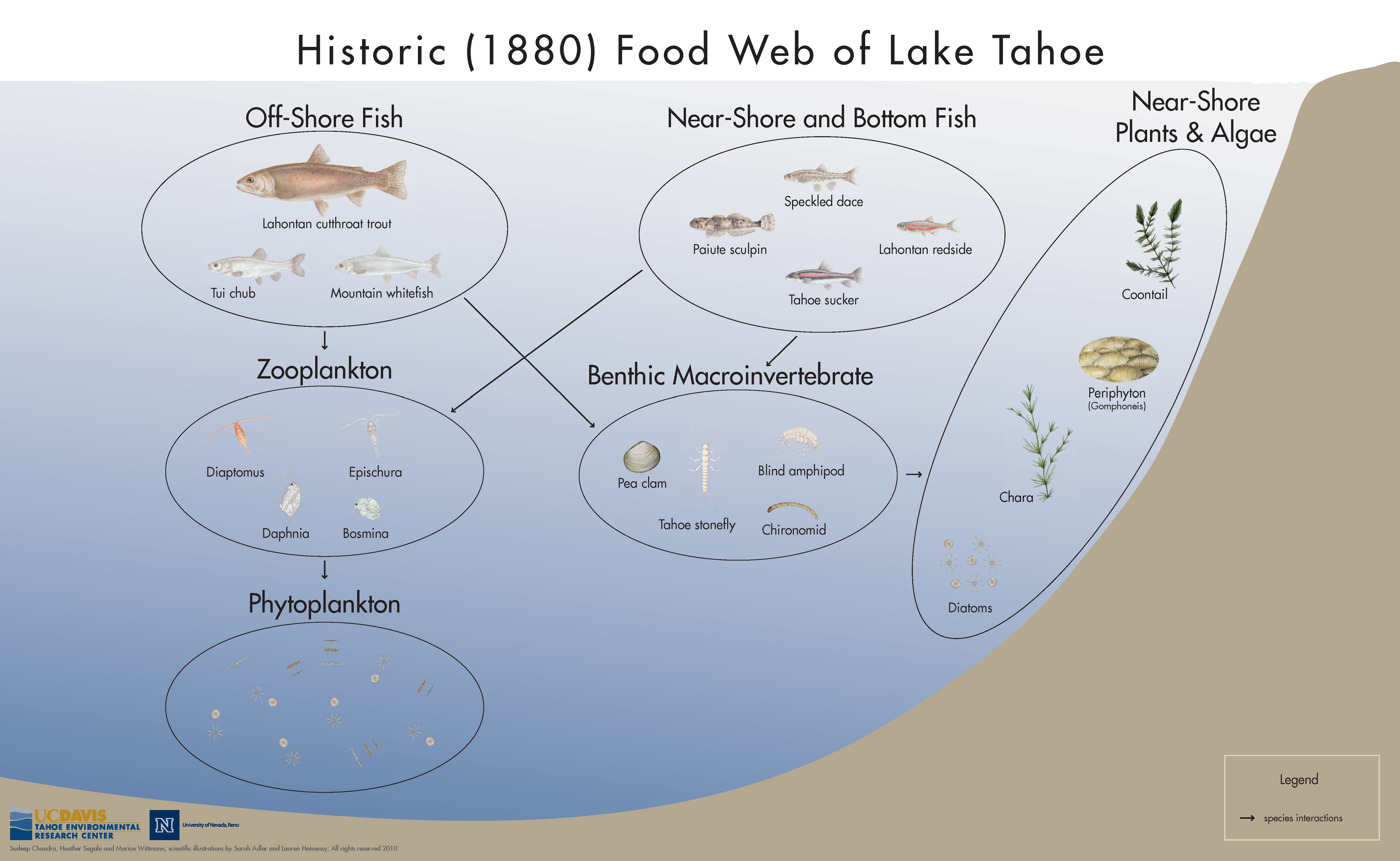 Striking kokanee salmon, a landlocked variation of sockeye, were introduced into Lake Tahoe in the 1950s, and draw crowds of visitors to witness their migration into creeks of the watershed each fall. Lake Tahoe’s food web took a big hit when mysid shrimp were introduced in the 1960s in an attempt to provide food for the growing populations of sport fish. Not only did the mysids fail to feed the game fish (partly because they migrate to the lake bottom during the day), they also decimated the lake’s native zooplankton populations, such as Daphnia, that actually did feed the fish. While a number of small native fishes have also declined in the lake, including Lahontan speckled dace and Lahontan redside, non-native fishes have continued to thrive following the unintended introductions of warmwater sportfishes in the 1980s. The introduction of Asian clams and invasive plants, such as curlyleaf pondweed and Eurasian watermilfoil, have continued to transform the nearshore environment of Lake Tahoe, as well as the dynamics of the foodweb, as shown as in these graphics from the UC Davis Tahoe Environmental Research Center. 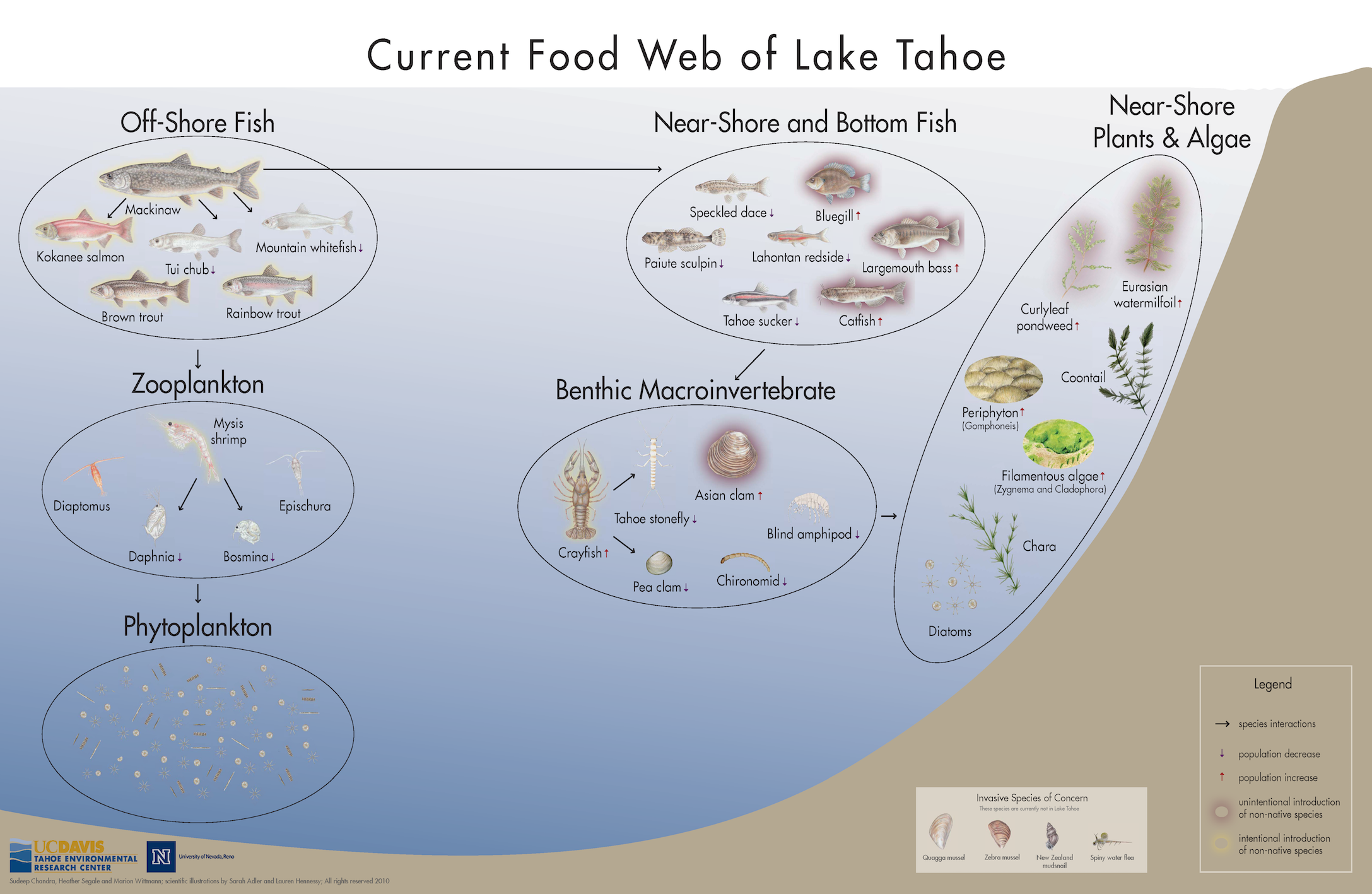 A number of efforts are currently attempting to curb the impacts of non-natives in Lake Tahoe. The University Nevada Reno has recently conducted fish removals using boat electrofishing. The surveys revealed an abundance of largemouth bass and bluegill, which were donated to feed people at local homeless shelters, as well as the occasional monster goldfish. Large rubber mats were used to suffocate beds of Asian clams, and a systematic approach was also launched to try to root out invasive plants in key areas of the lake. Researchers are also in the process of reintroducing Lahontan Cutthroat Trout into neighboring Fallen Leaf Lake, which includes trying to prevent the fish from hybridizing with introduced rainbow trout. Perhaps one day these native fish may be restored to Lake Tahoe. But one thing is clear: the San Francisco Bay-Delta is certainly not the only waterbody in California to be irreversibly transformed by non-native species.