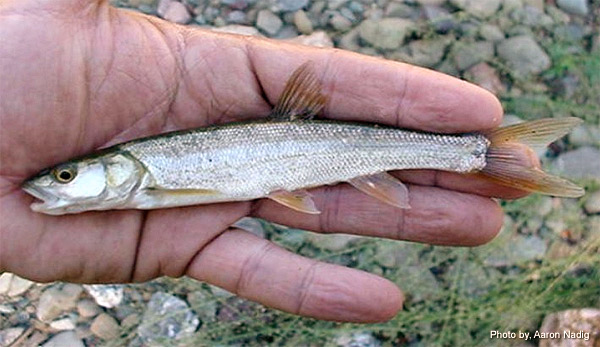 Predation is a natural part of maintaining a healthy ecosystem. But when predation by one species on another increases because of human changes to the environment, it can have a negative impact on the ecosystem. Northern pikeminnow, Ptychocheilus oregonensis (formerly known as northern squawfish), are indigenous to the Columbia River, but they were not prevalent before the construction of the hydroelectric Federal Columbia River Power System. Reservoirs created by the hydropower system provided excellent slack water habitat for pikeminnow, and as a result their population in the lower Columbia and Snake Rivers flourished. They are voracious predators and salmonid smolts comprise a large portion of their diet (Sauter et al 2004). Northern pikeminnow prey on millions of salmon and steelhead each year in the lower Columbia and Snake River systems.

The Northern Pikeminnow Management Program (NPMP) was established in 1990 in an effort to reduce predation by northern pikeminnow on juvenile salmon and steelhead as they emigrate from the lower Columbia and Snake Rivers to the ocean. The goal of the program is not to eliminate northern pikeminnow, but to reduce the average size and decrease the number of larger, older fish that are known to be highly predacious. Since 1990, the Bonneville Power Administration (BPA) has sponsored the Northern Pikeminnow Sport Reward Fishery Program in the lower Columbia River and a portion of the Snake River (from the mouth to Hells Canyon), offering cash to registered anglers for each northern pikeminnow they catch measuring nine inches or longer. Site-specific gill netting and dam angling were also part of the NPMP, but were less efficient than the sport reward program and were discontinued in 2002 and 2006, respectively.

Each year thousands of anglers fish the Columbia and Snake Rivers for northern pikeminnow. The program runs annually from May 1 through September 30. While most anglers bring in just a few dollars, the top angler in 2011 earned $66,478 and the second place angler took home $60,742. This informative video describes how you can earn $20,000-50,000 annually while fishing for northern pikeminnow. The 2012 Sport Reward payment schedule is as follows: 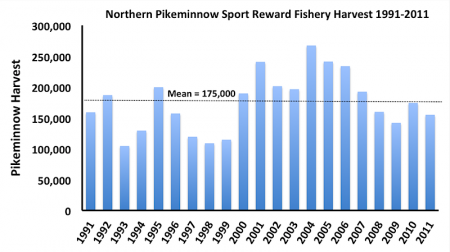 Since 1990, the BPA has paid anglers to remove more than 3.9 million northern pikeminnow from the Columbia and Snake Rivers (annual average of 175,000), reducing predation on juvenile salmon by an estimated 40 percent. This equates to 4 to 6 million salmon smolts that would have otherwise been eaten by this predator.

This type of sport reward program could be successful in other systems to suppress populations of key predators of juvenile salmon and steelhead as they make their way out to the ocean. It is a win-win situation; the anglers get paid for their efforts while benefiting the survival of a salmon and trout.