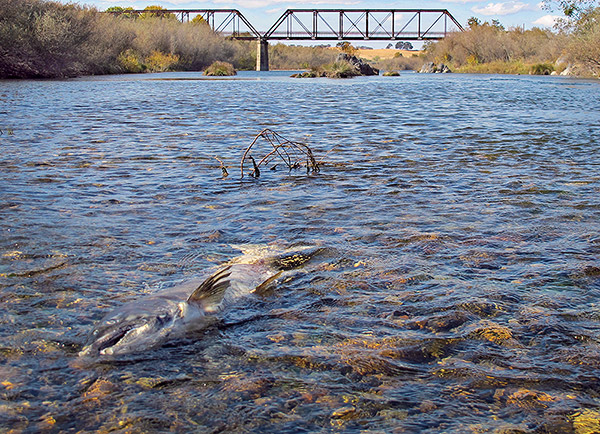 After many dreary years of low salmon escapement in the Sacramento basin, the 2012 Sacramento Index (SI), or adult population estimate, of 618,258 Chinook proved to be the best year in California since 2005. Commercial and recreational ocean harvests south of Cape Falcon, Oregon, were each more than triple the previous season, with 180,700 and 91,200 Chinook salmon captured, respectively. The news of the first success of the river harvest in years likely spread like wildfire, and river harvests totaled 62,200 in the Sacramento—the best year since 2005. Meanwhile, natural and hatchery escapement were estimated to be 162,900 and 121,000, respectively. Last year, the stock was classified as overfished based on a 3-year geometric mean spawning escapement of 85,195. But no longer: in 2012 the 3-year geometric mean spawning escapement reached 161,471, well above the threshold of 122,000 needed for the Sacramento River Fall Chinook to be declared rebuilt.

In recent years, the Pacific Fisheries Management Council (PFMC) estimates have at times been far greater than the actual SI contribution to the Central Valley, requiring modifications to the estimates in 2012. Currently, estimates are made using a regression that relates the previous year’s jack (early maturing males) escapement to the following year’s total escapement. Essentially, the method predicts that if there are a lot of jacks in the basin this year, then next year will be a good year for salmon. In 2011, the total Chinook salmon jack escapement was greater than any year on record (85,719), and the current regression would have estimated a total of more than two million Chinook salmon returning in 2012! In an effort to come up with a more realistic forecast, PFMC used the data from only recent years (2009-2011) to come up with a modified regression that decreased the 2012 SI forecast to 819,400 Chinook salmon. The modified forecast still overestimated by 25%, but was more accurate than predictions in 16 of the last 20 years (Figure 1). However, in 2013 PFMC reverted to using the original regression (data from 1990-forward) to estimate the SI forecast in 2013 (834,208). Using the modified regression for the 2013 forecast, the estimate would only be around 260,000 Chinook salmon, which may have resulted in a California salmon fishing ban once again.

All this fluctuation proves the limitation and inaccuracy of using jack abundance alone to predict future salmon runs. Many factors affect salmon survival, and we currently have the technology to summarize these factors and create improved models that can accurately forecast the population. On the Columbia River, a team of scientists from NOAA and Oregon State University recently tested 31 different variables to determine which factors were good indicators for predicting adult spring run Chinook salmon (see The salmon hunger games). Chinook jacks were just one of many factors included in the salmon forecast, and were not even the most significant. The two most important categories of predictors were 1) large-scale oceanic and atmospheric variables, which evaluated the Pacific Decadal Oscillation and the Oceanic El Niño Index, and 2) growth and feeding variables, which evaluated food availability and timing, as well as salmon size (Burke et al.). While it is obviously difficult to predict the future, modifying the PFMC’s current forecasting method could avoid the pitfalls of relying too heavily on one variable, and also increase the forecast time to up to two years. Both of these factors could drastically improve our ability to manage salmon in the future.

Figure 1: Comparison of the actual adult salmon population to the PFMC forecast. 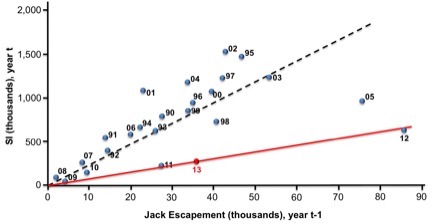