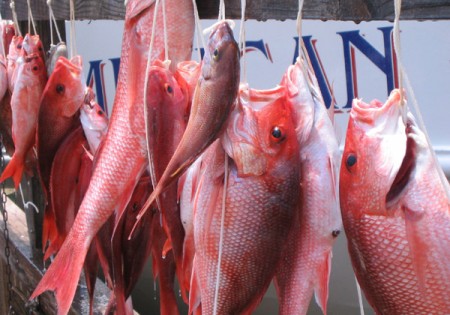 Whether it’s a grilled juicy filet that entices you or the fish and chips down at the local crab shack, the delicious taste of red snapper is on its way back to the menu. For the first time in two and a half years, anglers in coastal communities between North Carolina and Florida will finally get their chance at reeling in this colorful fish. The temporary moratorium on fishing is believed to have benefited the species enough to begin the rebuilding process towards a sustainable future, given that the stricter fishing regulations are met. The South Atlantic Fishery Management Council decided in a 12-1 vote to request that NMFS reopen the South Atlantic red snapper fishery. The request included a few provisions: that recreational fishing will have a limit of one snapper per person (no size limit) and be open for one or more three-day weekends, and that commercial fishing will have a 50 pound trip limit and will be open for brief seven-day ‘seasons’ until the catch limit is projected to be met. Additionally, they requested that NMFS and the states provide additional resources for collecting biological data during the brief season. NMFS will make a decision on the request within 60 days.

The red snapper is native to the western Atlantic Ocean and ranges as far north as Massachusetts in the U.S. down to Ceará, Brazil. Adults can be found at reefs or rock outcrops along the ocean floor in waters ranging from 30 to 600 ft. in depth. In the decades prior to the closure, the red snapper fishery experienced levels of fishing that were unsustainable for the population. Eventually, the over-exploitation had dramatic effects on the population and the size of the fish being caught. Snapper can reach 40 inches in length and can live for more than 50 years, but fishing pressure has affected the demographic structure of the population. In 1962, the average fish caught was 11 years old and weighed 21 lbs; by 2009, the averages dropped to 2 years old and only a pound. Most red snapper don’t reach sexual maturity until they are between the ages of 2 and 5, which means that in recent years many snapper were caught before they had the chance to contribute to the future of the species. Larger females also carry more eggs than the younger, smaller fish (i.e., they have greater fecundity). When a red snapper first matures they usually carry only 150,000 eggs, while fish older than ten can carry more than 3 million eggs. 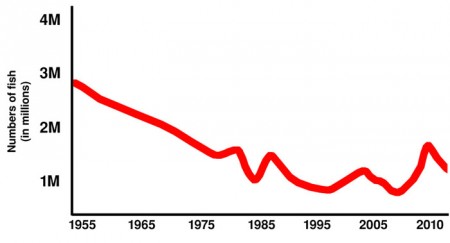 The South Atlantic red snapper populations are nowhere near the historic population levels, but the new management plan has the dual objective of allowing fishing to continue and, hopefully, the population to rebound (Figure 1). Historical peak harvest has been as high as 2,935,000 lbs. of fish (gutted weight) in 1962 but dropped to only 511,000 lbs. in 2010. The current level is believed to be between 11 and 14 percent of a healthy population, but the reduced fishing pressure should allow fish to reach a larger size and older age, therefore, increasing the amount of eggs that are produced each year. Research suggests that the new regulations will provide a sustainable future for the red snapper, but it will take time before they have fully recovered.