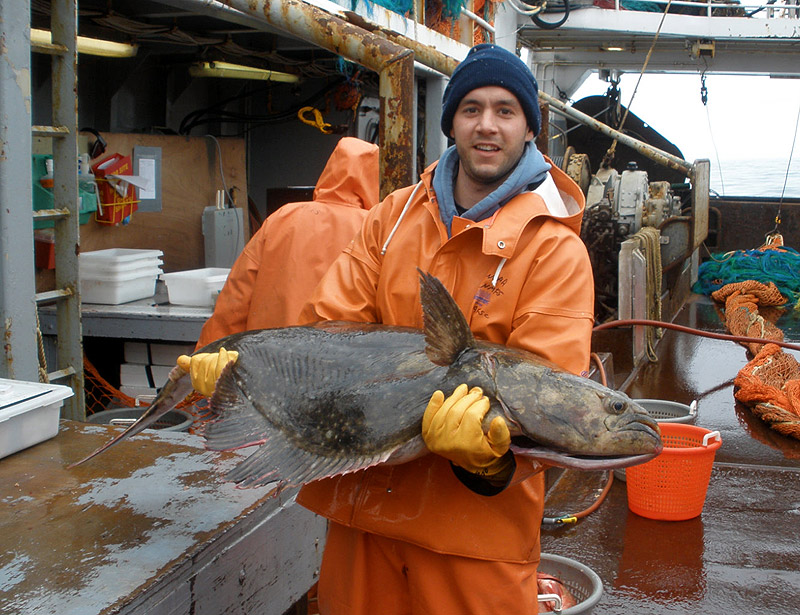 Pacific halibut (Hippoglossus stenolepis) and Atlantic halibut (Hippoglossus hippoglossus) are two very similar species residing on opposite shores of North America. Atlantic stocks have a long history of commercial fishing, but the decades of heavy fishing have severely degraded the stocks. During the early part of the 1900s the Gulf of Maine-Georges Bank region annually landed an average of 144 million tons of Atlantic halibut, but landings decreased to less than 20 million tons by 2000. The National Marine Fisheries Service listed the Atlantic halibut as a species of concern and they are “red-listed” by the Seafood Watch Program managed by Blue Ocean Institute and Monterey Bay Aquarium.

The Pacific halibut fishery is managed by the International Pacific Halibut Commission, which was formed in the early 1920s when it was already becoming clear that the species was at risk of being overfished. The commission today caps the catch at 20 percent of the population, sets limits for size, gear type, season and puts fishermen in a catch share pool, eliminating the need to fish competitively.  Pacific halibut fishers have seen reduced catch quotas over the past two decades and many are pointing their fingers at the amount of by-catch (4.4 million pounds) allowed by groundfish trawlers. Not only are there less fish available, but the average size of fish has been decreasing too.  There is some debate as to the cause of the declining size of Pacific halibut, and potential causes include selective pressure on size due to harvest and food competition by arrowtooth flounder. Although there is no easy answer for what is causing the reduced size of Pacific halibut, fisheries managers are determined to not let history repeat itself.