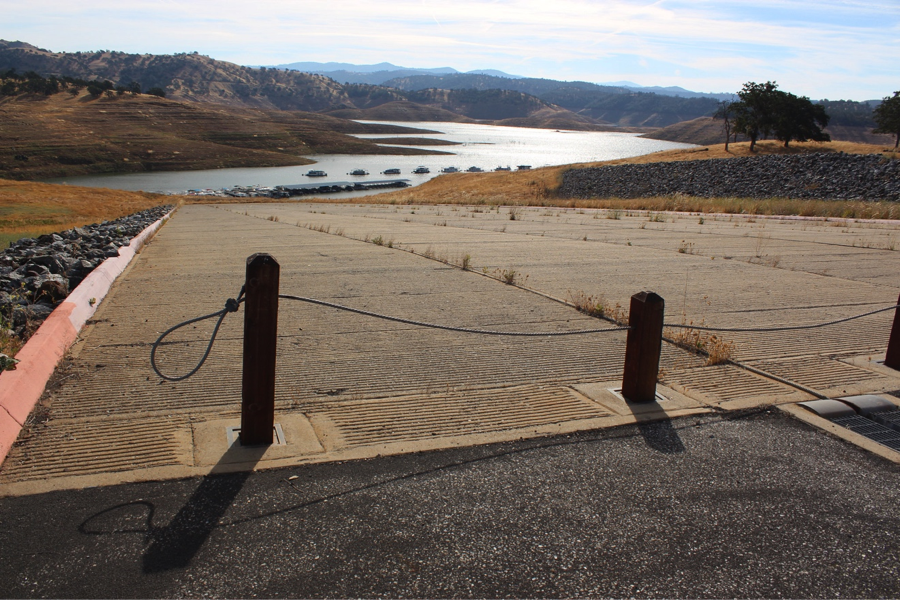 You have probably seen the recent headlines, “California Enters 6th Year of Drought.” The 2016 water year ended on September 30, marking the end of our fifth consecutive year of drought. We have only had two droughts that lasted six years over the past century: the Dust Bowl that lasted from 1929­–1934, and another from 1987–1992. In 1992, near the end of the 1987–92 drought, the Department of Water Resources estimated the chances of having another severe six-year drought to be 1.4% (1 in 70 years) in the Sacramento Basin, and 0.3% (1 in 300 years) in the San Joaquin Basin. Though not a feat anyone is excited to achieve, it looks like we are going to defy the odds just 20 years after that prediction. 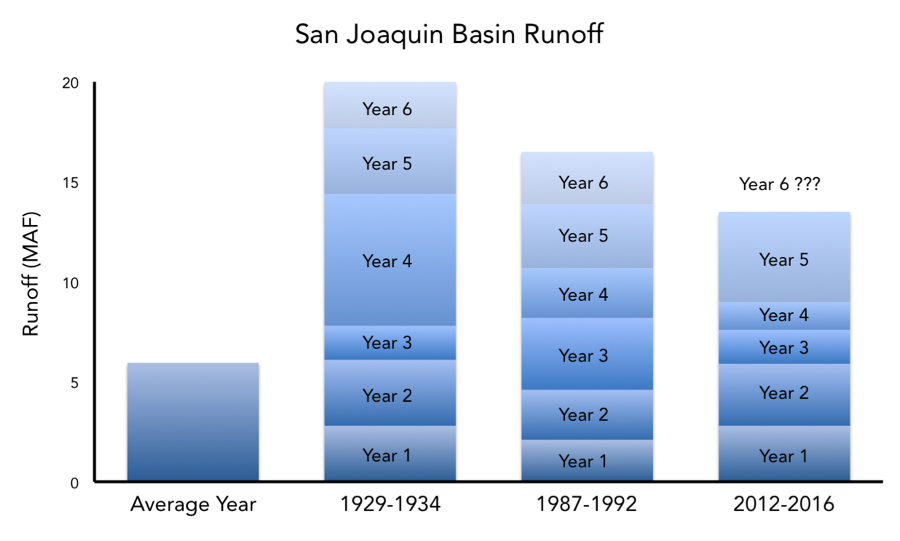 Looking at recent conditions in different California basins compared to the last two extended droughts provides some perspective of the severity of the current drought. The average annual runoff in the San Joaquin Basin is composed of full natural flow into the San Joaquin, Merced, Tuolumne, and Stanislaus rivers, and averages 5.95 million acre feet (MAF) of water each year. Further to the north, runoff in the much larger Sacramento Basin is the summation of full natural flow into the Sacramento, Feather, Yuba, and American rivers, and averages 18.26 MAF of water per year. The San Joaquin Basin has been impacted the most over the past five years, with cumulative runoff measuring less than the 1987­–92 drought, and far below the Dust Bowl years (see Figure 1). However, the Sacramento Basin made up a lot of ground in the 2016 water year (see Figure 2), with El Niño bringing above-average precipitation and near-average snowfall to the northern half of the state. This resulted in higher runoff in the Sacramento Basin in 2016 than during Year 5 of the last two extended droughts. The San Joaquin Basin has incurred such a deficit in the last few years that it will most likely take multiple above-average years to make up the amount of water lost during this drought. Following the 1987–92 drought, both basins experienced above-average precipitation in seven of the next 10 years. We can only hope history will repeat. 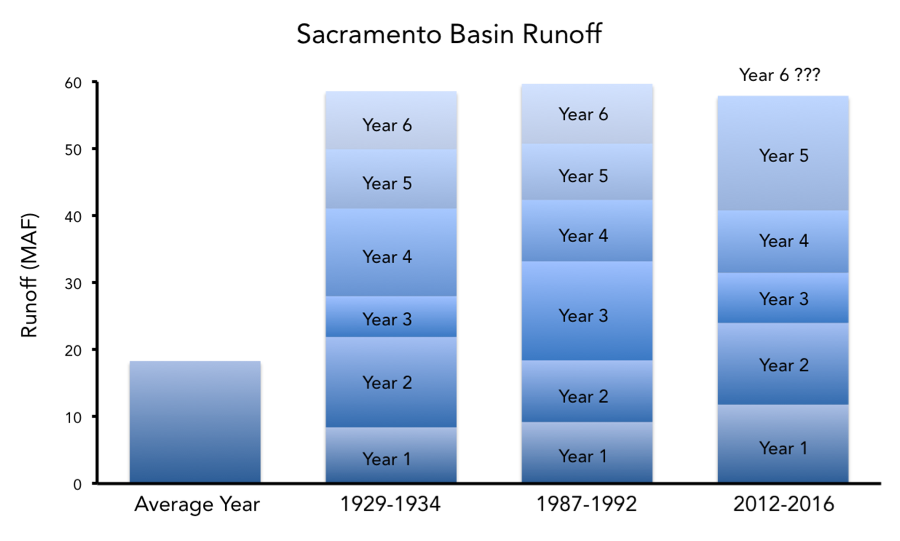 Drought conditions have eased somewhat over the past year, with 21 percent of the state in exceptional drought, which is down from 46 percent at this time a year ago. Currently, 43 percent of the state remains in extreme drought or worse, 62 percent is in severe drought or worse, and 81 percent of the state is in moderate drought or worse. Major Central Valley reservoirs are currently holding 69 percent more water than last year (Figure 3); however, storage remains lower than historical levels, with Northern California reservoirs in better shape than those to the south. Recently, Northern California felt the impact of Typhoon Songda in the form of an atmospheric river, as the Northern Sierra racked up 297% of average rainfall and the San Joaquin Basin received 241% of average; however, the Tulare Basin to the south remains at 8% of average precipitation. Even though heavy precipitation drenched many parts of Northern California, the downpour didn’t equate to much runoff or change in reservoir storage because most of the water soaked into drought-stricken soils. It seems unlikely that the drought will end this year. Forecasters are currently predicting a 70% chance that La Niña will develop this fall, but give it only a 55% probability of persisting through the winter. If a La Niña does form and persist it could bring above normal precipitation to Northern California. 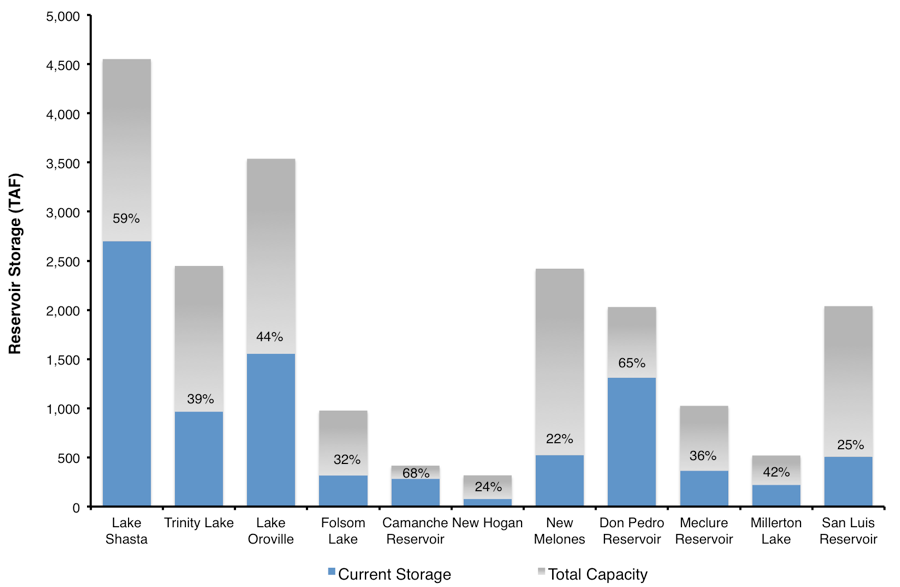 Despite the ongoing drought conditions, water conservation has recently decreased in California towns and cities as a result of regulators easing water restrictions for municipalities. Statewide, cities saved only 17.7 percent this past August, compared to 27 percent a year ago. The State Water Resources Board currently allows urban water agencies to set their own water conservation targets if they can certify that their water supply can meet demand for three additional dry years. Of the water suppliers that submitted this kind of “stress test,” 343 declared that they have enough water to last three more years of drought, while only 36 declared that they would face a supply shortage. Even though the State-mandated water conservation restrictions have been lifted, the onus for conservation has been shifted to the local level, and it is still important for the public to continue to conserve water, since there is no way to know how long this drought will last. While six-year droughts were thought to be uncommon, all indicators point to this one defying the odds.