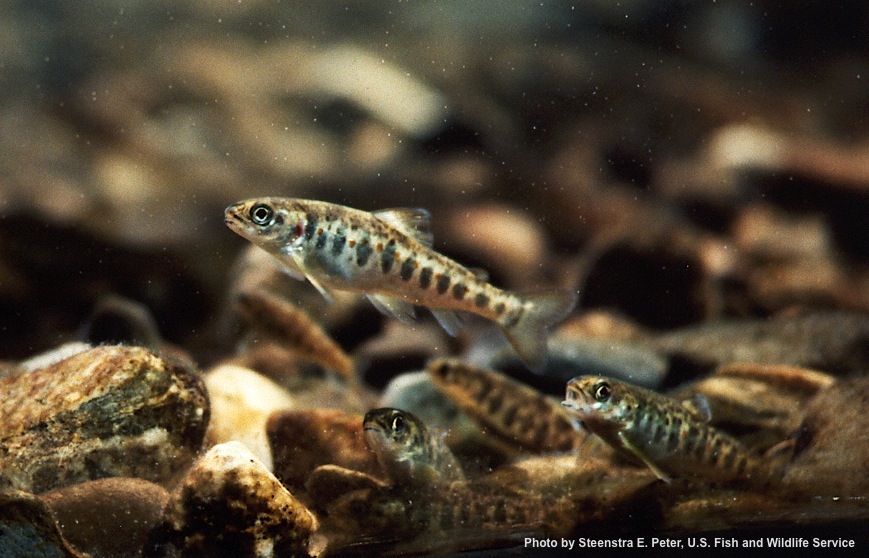 As global temperatures continue to rise, and the Pacific Coast endures its third consecutive year of record drought, discussions of how warming temperatures and low water levels will affect fish are constant topics of debate (see: Winners And Losers In Warm, Dry Times). Like most “cold-blooded” animals, fish generally have little ability to regulate their internal temperature, so their body temperature is usually very close to that of the surrounding environment. Changes in environmental temperatures can therefore have large effects on fish. From survival and reproduction, to digestion and respiration, nearly all physiological processes are only possible within a small range of temperatures. Many people assume that salmonids, with their intricate life-history and complex water needs, will be among the groups of species most affected by climate change (Crozier et al. 2008, Rand et al. 2006). However, the findings of a recent study published in the journal Nature Communications suggest that at least some salmon are actually more heat tolerant than previously suspected.

The study, conducted by researchers from the University of Oslo and the University of British Columbia, investigated potential effects of climate change on Atlantic salmon (Salmo salar). The team collected eggs from two wild populations of Atlantic salmon that reside at the extremes of the species’ European distribution (Norway’s Alta River in the north, and France’s Dordogne River in the south), where they naturally experience very different temperatures (a maximum of 17° C in Norway, compared to a maximum of 26° C in France). After the eggs hatched, fish from both populations were reared for approximately three months under two different temperature regimes, either at 12° C (54° F) or 20° C (68° F).

The researchers used the salmon’s heart rate as a proxy for their ability to withstand high temperatures, because cardiac function is known to limit tolerance to high temperatures in a number of different fish species (Steinhausen et al. 2008, Eliason et al. 2011). To measure the salmon’s cardiac performance, the researchers surgically installed small monitors that measured the heart rate of the fish as they were exposed to warming water temperatures. The team recorded the salmon’s maximum heart rate to measure the limit of the fish’s physical performance. They also noted when the salmon began to develop cardiac arrhythmias (i.e., irregular heartbeats) as a signal that the water temperature was approaching a lethal limit for the fish.

Although the scientists predicted that the fish from the warmer environment in France would be better able to tolerate higher temperatures in the lab, the salmon from Norway and France actually showed remarkably similar tolerances to high water temperature. Salmon from both populations acclimated at 12° C reached a maximum heart rate of about 150 beats per minute (bpm) at 21° C, and began to develop cardiac arrhythmias at 21° C to 23° C. In contrast, salmon from both Norway and France that were acclimated at 20° C showed a maximum heart rate of about 200 bpm at 27° C, and only showed cardiac arrhythmias when the water reached an astonishing 27.5° C (81.5 ° F).

This research reveals that Atlantic salmon, despite significant differences in the environments where they live, show similar cardiac responses to elevated temperatures. The fish from Norway were surprisingly adaptable in their ability to cope with the heat, especially when raised under warm temperatures. Thus, the temperature that an individual fish was raised in had a bigger effect on its temperature tolerance than the environment where its parents lived. This offers some hope that Atlantic salmon may have a fighting chance in adjusting to a warmer world. As salmon populations worldwide face significant threats from human actions as well as global climate change, studies like this show that even sensitive fish can respond and survive in changing conditions.