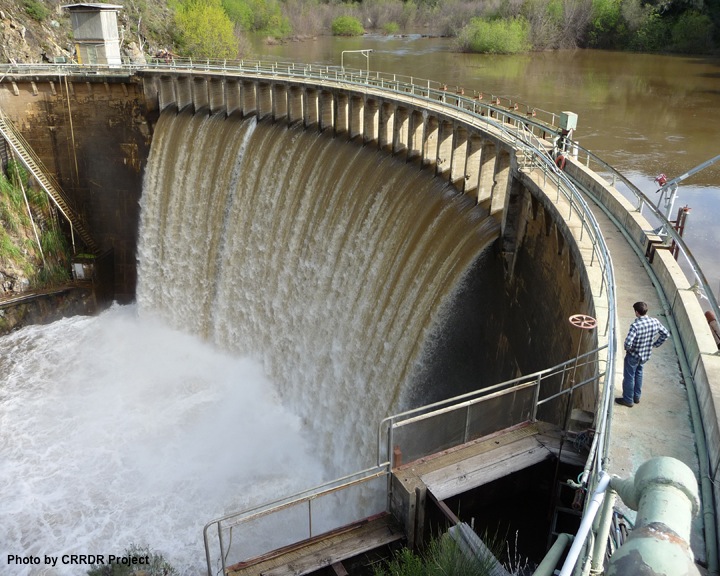 The largest dam removal project in California history is underway. After years of studies and preparation, the 106-foot-tall San Clemente Dam on the Carmel River is in the process of being dismantled. A study conducted by the Department of Water Resources (DWR) Division of Safety of Dams in the early 1990s found the San Clemente Dam to be structurally unfit and unable to survive a large-scale earthquake or probable maximum flood. In addition to these safety concerns, the reservoir can no longer hold its normal capacity of water due to the large sediment buildup behind the dam. Originally constructed in 1921, the dam has since become antiquated and redundant due to the Los Padres Dam constructed further upstream. The San Clemente Dam will be one of the largest dam removals in U.S. history, joining the ranks of other dams removed in Washington State beginning in 2011, such as the 108-foot-tall Elwha Dam and 210-foot-tall Glines Canyon Dam on the Elwha River and the 125-foot-tall Condit Dam on the White Salmon River.

The San Clemente Dam has had a significant impact on Carmel River Steelhead Trout (Oncorhyncus mykiss) over the numerous decades of its existence. Prior to the dam’s construction, the steelhead population found in the Carmel River was estimated to be between 12,000 and 20,000 individuals, dating back to 1850. However, when consistent data collection occurred from 1964–1975, an annual average of 821 steelhead was found upstream of the dam, and as recently as 1994, the population fell as low as 91 upstream migrants. In 1997, the Carmel River Steelhead population was listed as threatened in compliance with the Endangered Species Act of 1973. The dam was also found to have a detrimental effect on the local population of the California Red Legged Frog (Rana draytonii) due to drastically reduced flows as water was diverted to the peninsula, in addition to episodes of recurring drought. These low-water areas made stranding a common occurrence for both fish and frogs.

In 2006, when DWR made recommendations on how to retrofit the dam to make it compliant with current safety regulations, the cost of these modifications was deemed too expensive for water customers. The dam owners, California American Water, determined it would be more cost effective to just remove the dam. The $84 million removal project is a collaborative effort between California American Water, the National Marine Fisheries Service, the California Coastal Conservancy, and the non-profit Planning and Conservation League Foundation. The dam removal project will reroute the Carmel River and hopes to restore spawning and rearing habitat through the entire 25-mile stretch between the watershed above the dam and the lagoon where it empties into the ocean. With the dam removed, sediment can also flow freely downstream where it will help reduce beach erosion that threatens many homes above Carmel Bay. The removal will also decrease the potential flood risk to 1,500 homes and businesses downstream of San Clemente Dam. Upon completion of the project, over 900 acres of watershed will be restored, resulting in a total of 5,400 acres of contiguous regional parkland.

Sedimentation behind dams plagues several other reservoirs in California. Recent surveys by UC Berkley have identified three other dams with severely decreased storage due to sediment buildup: Rindge Dam on Malibu Creek, Matilija Dam on the Ventura River, and Searsville Dam on San Fracisquito Creek. A recent study by NOAA Fisheries on the Elwha River has found that while there may be initial detrimental effects to dam removal, there is promise for eventual positive responses in populations of all resident salmonids. Many people will be intently following the removal of the San Clemente to see what lessons the process might offer for other California dams.