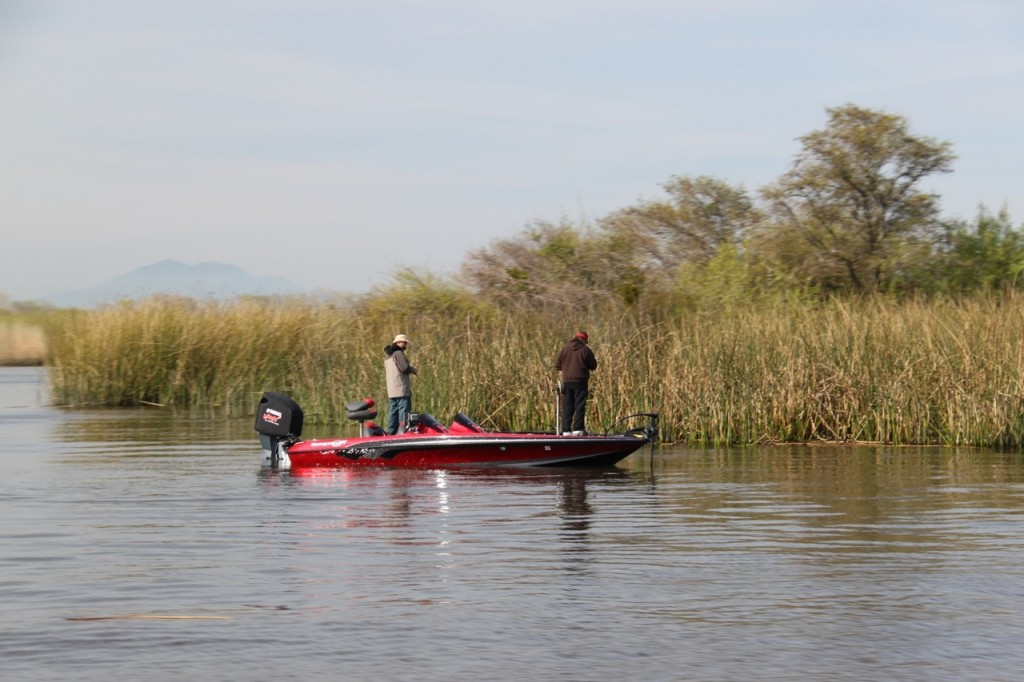 February 2 is World Wetlands Day, a chance to raise awareness about the importance and value of wetlands. Unfortunately,  the results from the 2013 California Department of Fish and Wildlife (CDFW) Fall Midwater Trawl present a grim diagnosis of the health of California’s largest wetland ecosystem, the San Francisco Bay Delta. With the exception of a few years (1974 and 1979), the Fall Midwater Trawl has been conducted annually from 1967-2013 at approximately 122 stations throughout the Delta. Each station is sampled monthly from September to December, and station locations encompass San Pablo Bay and both the Sacramento River (upstream to Hood) and San Joaquin River (upstream to Stockton). Six fish species documented since 1967 include striped bass (Morone saxatilis), American shad (Alosa sapidissima), threadfin shad (Dorosoma petenense), delta smelt (Hypomesus transpacificus), longfin smelt (Spirinchus thaleichthys), and Sacramento splittail (Pogonichthys macrolepidotus).

Based on population indices reported by CDFW for the Fall Midwater Trawl, all six fish species exhibited low abundance in 2013, and many show continued declining abundance trends (Figure 1). Despite a slight increase in 2011, delta smelt abundance appears to remain low. Low abundance of multiple species may be indicative of the “continuing biological collapse” of the Bay Delta ecosystem, as stated by the California Sportfishing Protection Alliance. Population indices for all surveyed fish species have declined by more than 90 percent since surveys began. Care should be taken in interpreting such calculated indices and extrapolating these trends to a population as a whole, because a survey may not necessarily be representative of an entire population. However, it’s hard to deny that many Bay Delta fish populations have suffered dramatic losses in recent decades. 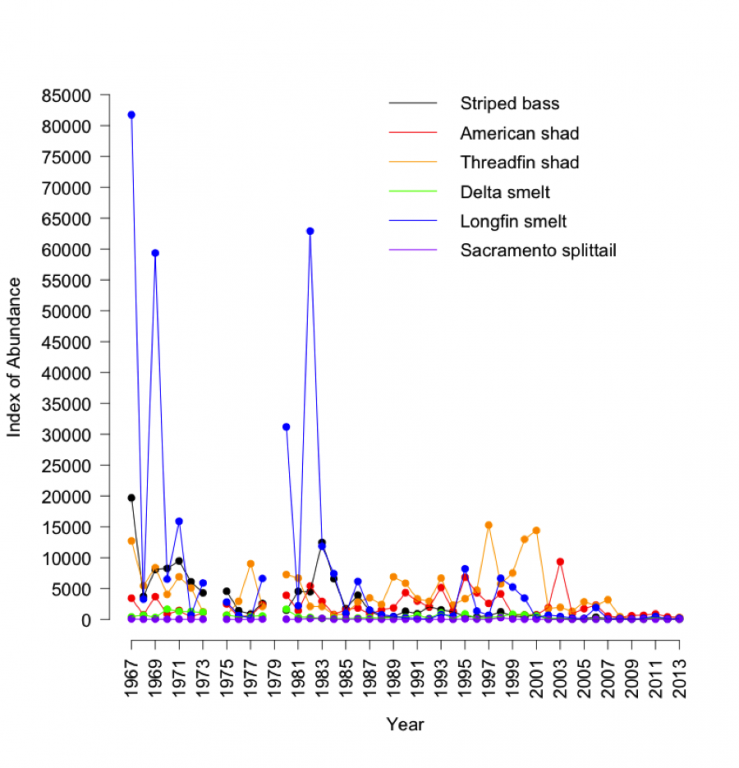 Fish declines in the Bay Delta have been linked to poor water quality, predation by non-native fishes, entrainment, and habitat loss (CDWR 2013). Striped bass, American shad, and threadfin shad are non-native to California, while the delta smelt, longfin smelt, and Sacramento splittail are native species. The delta smelt and longfin smelt are both listed as endangered under the Endangered Species Act, and the Sacramento splittail was delisted in 2003. Non-native fishes, such as the striped bass are known to prey upon juvenile salmon, and likely upon many other fishes (Stevens 1966, Nobriga et al. 2013). Striped bass and American shad have been present in the Delta since the late 19th century (Moyle 2002), and threadfin shad were introduced as a forage fish to the Sacramento-San Joaquin drainage in 1959 (CDWR 2013). Non-native fishes can also compete for food and habitat resources with native species, and the threadfin shad likely competes with the native delta smelt (CSWEM 2010). Declining fish population indices are a symptom of a complex barrage of environmental changes that currently threaten California’s major freshwater habitats.