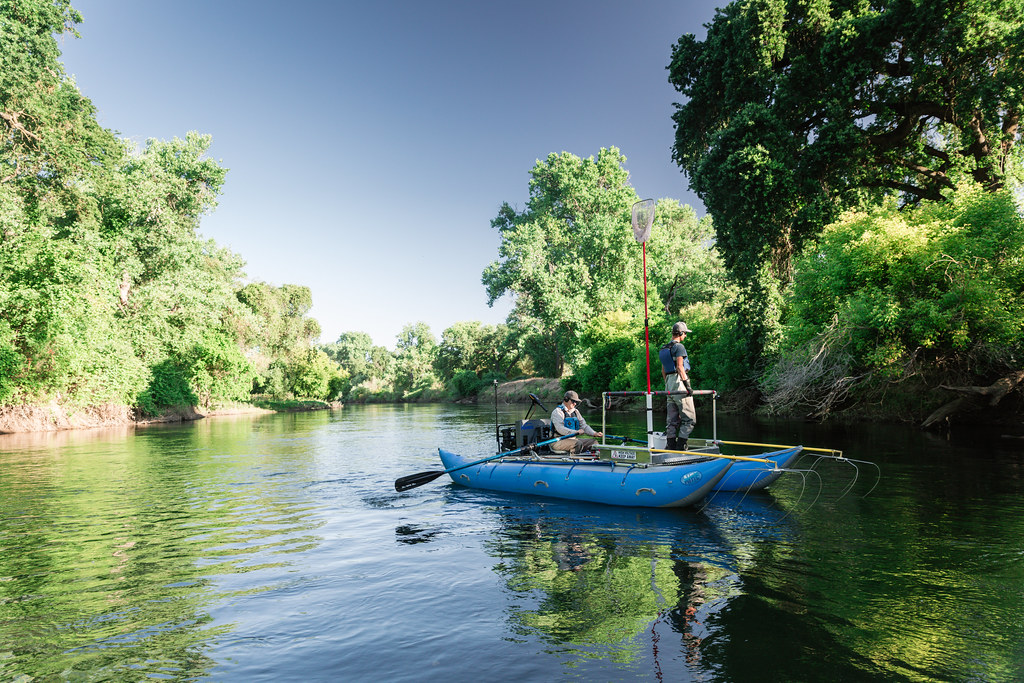 The close of another year gives us a chance to look back on milestones of all sizes, from new projects and scientific publications, to a giant stingray puppet and the growth of our office kittens. Here’s a look back at some of our highlights for 2018! In addition to our annual salmon and trout monitoring at our regular stations throughout the San Joaquin Basin, including our fish-counting weirs, we launched a few new projects this year. This included a survey of non-native fishes on the Stanislaus River, as well as our first foray into San Diego, where we conducted a habitat survey on Camp Pendleton. We maintained our Smolt Spy monitoring system at Los Padres reservoir (with a few surprises), and embarked on a subterranean adventure to rescue nearly 1,000 rainbow trout from an underground tunnel on the Tuolumne River. It was also a big year for our FABLAB, where we constructed a pair of giant elevator structures to raise and lower Riverwatcher fish counters in and out of large fish ladders in Santa Clara.

2018 marked a banner year for publications, with a total of five scientific papers accepted. This included a results of our surveys at restored levees on the Sacramento River (Hellmair et al. 2018), as well as an analysis of our rotary screw trap monitoring data, which will be released early next year. We also released three papers about our work in the Mekong Basin, including the results of our very first project in Laos, a participatory fisheries survey on the Nam Kading River (Patricio et al. 2018). Our other publications included a paper on aquatic protected areas, such as Fish Conservation Zones in Laos (Loury et al. 2017), and the results of fisheries surveys in wetlands of Cambodian dry forests (Ainsley et al. 2018).

Our ongoing work in the Mekong Basin kept us busy as well. As part of our work in Cambodia with the Wonders of the Mekong program, we hosted a conservation storytelling workshop for the first class of Mekong Conservation Heroes and led a workshop all about migratory fish in Cambodia. In Laos, we wrapped up another year with The Asia Foundation to train communities in how to monitor their local water quality using aquatic insects as bioindicators of stream health. We also continued our work on Fish Conservation Zones (FCZs), including field testing our draft FCZ guidebook, holding a study tour for seven communities with whom we have established FCZs in the past, and embarking on establishing new FCZs with two additional communities. Our Lao staff also traveled to Myanmar to help establish conservation zones for fish and turtles on the Chindwin River.

We attended and presented at several conferences this year, including the American Fisheries Society CalNeva Conference in San Luis Obispo, the Bay Delta Science Conference in Sacramento, and the World Small-Scale Fisheries Congress in Chiang Mai, Thailand. We also participated in more than 28 educational and outreach events in 2018, including several classroom visits and Ag Days. This included working with elementary school students to paint a Mekong giant stingray puppet to accompany our Mekong giant catfish in Chico’s Endangered Species Faire. We celebrated World Fish Migration Day in Laos for the third time, this year in with a Probarbus fish puppet parade and a game of Fish Conservation Zone tag in Phalath village. We produced a film on women in fisheries science, which we used as part of an Expanding Your Horizons outreach event for middle school girls, and our staff were also interviewed on multiple episodes of the Barbless Podcast in Chico.

We expanded our outreach efforts in Santa Cruz this year, including helping the Monterey Bay Salmon and Trout Project with their Salmon and Trout Education Program, and tabling at the Coastal Watershed Council’s Flyfishing Clinic on the San Lorenzo River. Around our Oakdale office, we put the final touches on our greenhouse, and which gave us a jump-start on our annual pepper production. FISHBIO Farms boasted a bumper crop of hops, some of which have been used in our regular FISHBIO Brewing activities. Our pair of rescued feral cats have become fixtures around our Oakdale office and keep us on our toes with their antics. It has definitely been a busy and successful year – watch our highlights video to see us in action. Thank you for following along with us, and a big thank you to our community of clients, partners, family, and friends that makes all of our work possible. Here’s to more in 2019!