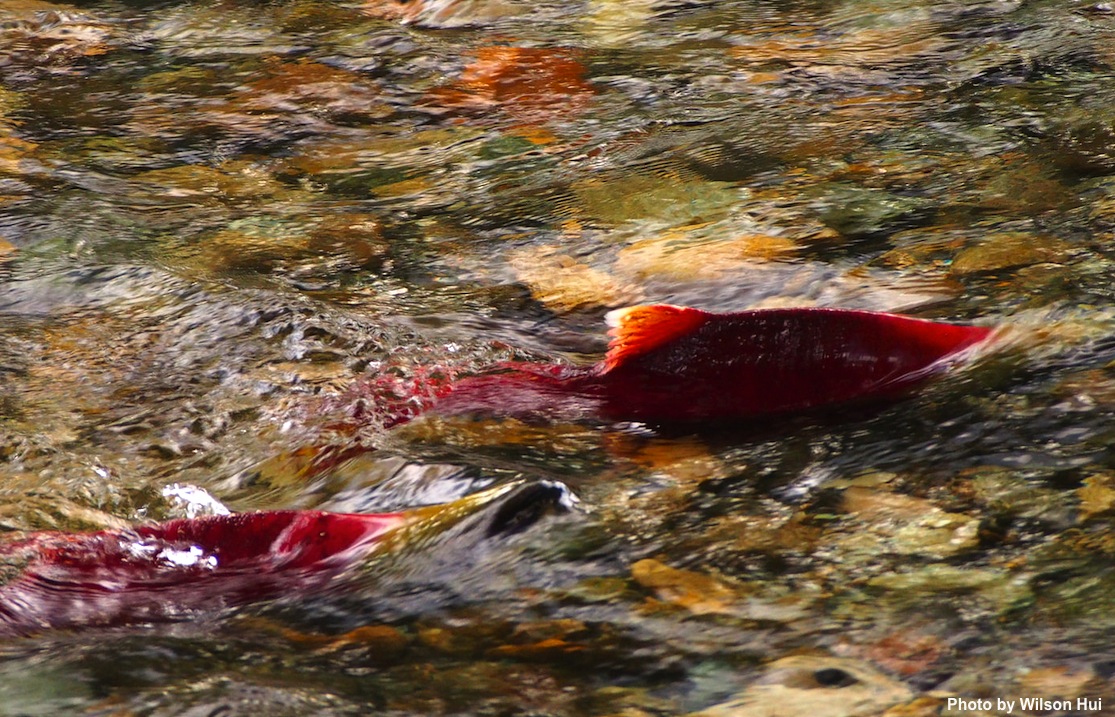 When it comes to salmon success stories, few can match sockeye salmon (Oncorhynchus nerka) from the Snake River in the Pacific Northwest. Not long ago, the Snake River sockeye was considered one of the most endangered salmon in the world, and the population literally teetered on the brink of extinction. Now, thanks to a concerted captive broodstock effort, this population has made a truly remarkable comeback, as chronicled in a recent Fisheries Magazine article by scientists from the Idaho Department of Fish and Game and the National Marine Fisheries Service. The article highlights how letting hatchery-reared fish spawn in the wild dramatically increases the survival of their offspring, which offers hope for a naturally sustaining population.

Historically, Snake River sockeye returned to five lakes in Idaho’s Sawtooth Valley, but today only the Redfish Lake population remains. The fish hatch in the lake, then travel an impressive 900 miles to the ocean, where they live the majority of their lifespan. They then return to fresh water, ascending more than 6,500 feet in elevation along the way, where they spawn and then die in Redfish Lake. While the sockeye run in the Sawtooth Valley was estimated to be 25,000-30,000 fish prior to modern settlement, a variety of factors such as commercial fisheries, mining, barriers, and predation contributed to their decline. By the 1990s, only single fish were returning to the lake from the ocean – including a sole male in 1992 nick-named “Lonesome Larry.”

Soon after the Snake River sockeye were listed as endangered in 1991, the Idaho Department of Fish and Game, the National Marine Fisheries Service, and the Shoshone-Bannock Tribes created a captive broodstock program in a “gene rescue effort” to preserve the genetic diversity of the population. The program started with the mere 16 anadromous adults that returned to the lake between 1991 and 1998, which were all taken into captivity, as well as 26 residual adults, which live their entire lives in the lake, and 886 outmigrating smolts that were captured during the same time period. Without this program, the scientists say, extinction would have been “all but certain” for the population. Once the adult fish return to the lake, they are trapped and either spawned at the Eagle Fish Hatchery, or released into Redfish Lake where they can spawn naturally.

The breeding program has since produced more than 10,000 adult descendants from the original 16 anadromous broodstock, which retain about 95 percent of the original population’s genetic variation (Kalinowski et al. 2012). One of the notable results is the surprising survival of “naturally-spawned” sockeye. The scientists found that “naturally spawned” fish, which are the offspring of hatchery parents allowed to spawn in the wild, make the full round-trip migration to the ocean and back again more often than juveniles released from hatcheries. In fact, the naturally-spawned sockeye had up to three times higher returns than those released from hatcheries as smolts, and more than ten times greater than those released as pre-smolts. These results are counter to the common belief that it takes multiple generations for hatchery-spawned salmon to regain the fitness advantages of wild salmon. Instead, it appears it can happen much faster (in the case of the Snake River Sockeye, after just one generation).

In the long-term, the researchers hope that naturally-spawned sockeye will play an important role in the survival of the Snake River sockeye. In order for the population to sustain itself, each returning adult must produce at least one returning offspring. In some years, sockeye that were naturally spawned have returned at more than twice that rate. This implies that under the right conditions, naturally-spawned sockeye may not only sustain the population – they may be able to help it grow. This is great news for Snake River sockeye, but also for other endangered populations throughout the Pacific Northwest. The fitness advantage of naturally-spawned adults shows that efforts to improve habitat may be more effective than efforts to trap and artificially spawn salmon, which are currently much more common. The researchers hope that their approach will prove invaluable as a model for future conservation – and we think the success story is deserving of a reference to Ray Troll’s “Return of the Sockeye.”