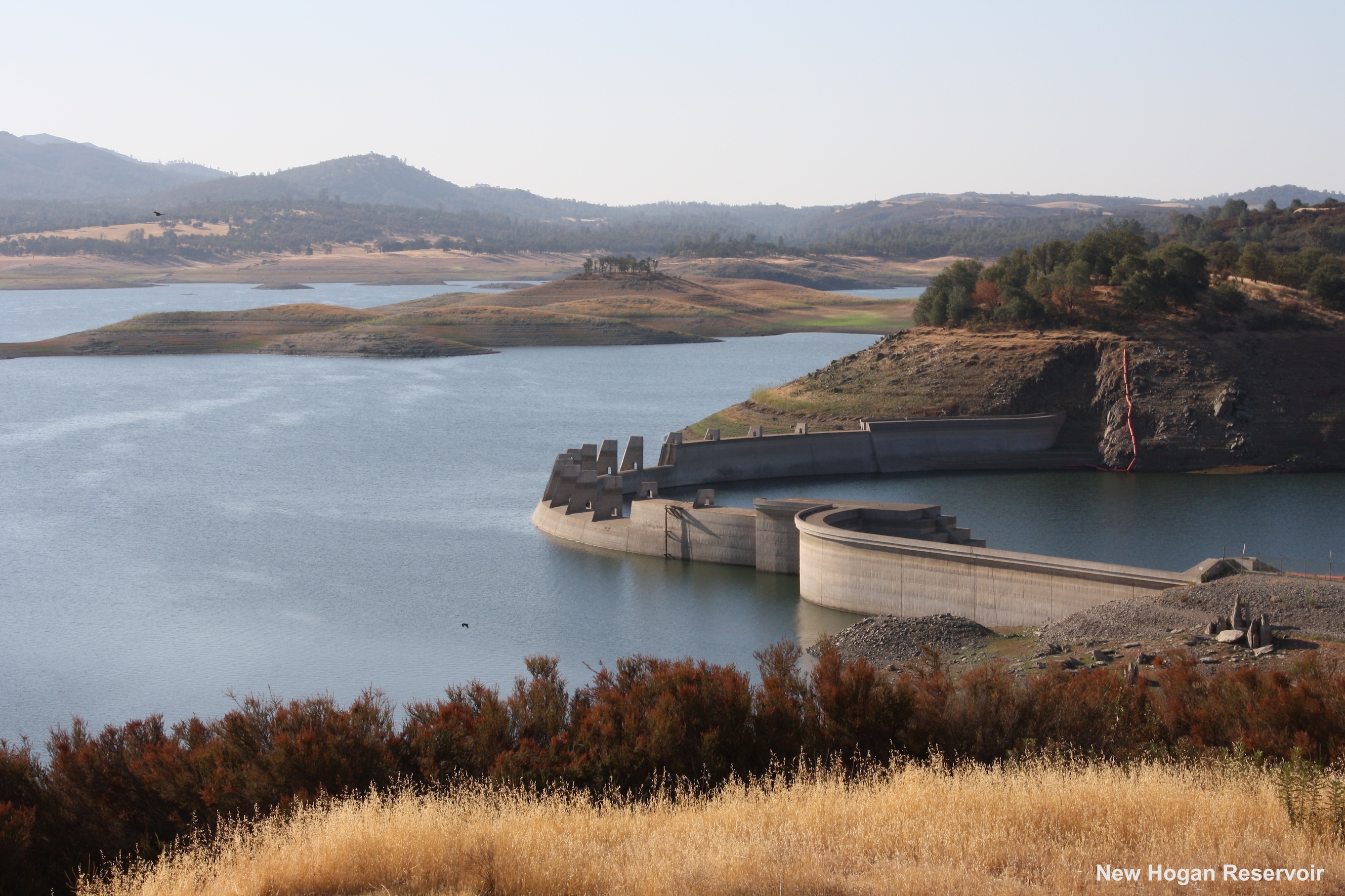 It’s time to make some water-related resolutions, because October 1 marks the beginning of a new water year. A “water year” is a term used by the U.S. Geological Survey and hydrologists to describe the season in which most of the precipitation falls and snowpack accumulates in the United States. Rather than following a calendar year, a water year does not split the fall and winter seasons because the majority of storms occur between October and May. A water year is identified by the year in which it ends, so September 30 will mark the last day of the 2014 water year, and October 1 the beginning of the 2015 water year. In California’s Central Valley, the Department of Water Resources classifies water years into different types (“wet,” “above normal,” “below normal,” “dry,” or “critical”), based on indices for the Sacramento and San Joaquin rivers that reflect the amount of runoff available in each basin. 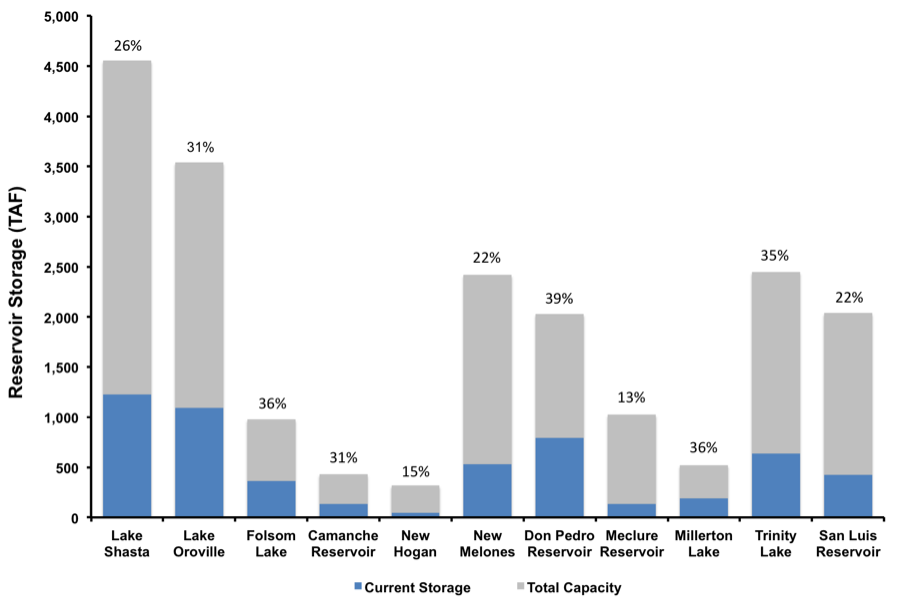 The outlook for the new water year is grim based on current estimates of California’s reservoir storage (see graph above). During the 2014 water year, California received only 60 percent of average precipitation in the Northern Sierra and 48 percent of average in the Southern Sierra. Despite measures to conserve our stored water, the carryover into the new water year is small. The Central Valley Project reservoirs (Trinity, Shasta, Folsom, New Melones, and San Luis) are at approximately one-third of their capacity, and the major State Water Project reservoirs are in no better shape. The Bureau of Reclamation (BOR) recently released the September water operation summary, which projects how water storage will change over the next year if the state were to receive an average amount of rain and snowfall (an amount that we have received or exceeded in 50 percent of historical years). The bad news is that even an average year would not make up the difference in water storage depleted over the past three dry years. And if 2015 is drier than average, the effects on water storage will be even worse.

This means that even if we receive an average amount of precipitation this coming year, some water storage facilities will be no better off this time next year than they are right now. For example, New Melones (see graph below) has been drawn down to 22% of capacity, and is projected to be depleted even further before there is any chance of receiving replenishing precipitation. The graph below shows storage in New Melones Reservoir is also currently in worse shape now (blue line) than it was three years into the six-year drought of 1987-1992 (green line). As reservoir levels drop, coldwater storage is in danger of being depleted, leaving fisheries managers with water that is too warm to support salmon and steelhead in the lower Central Valley Rivers. 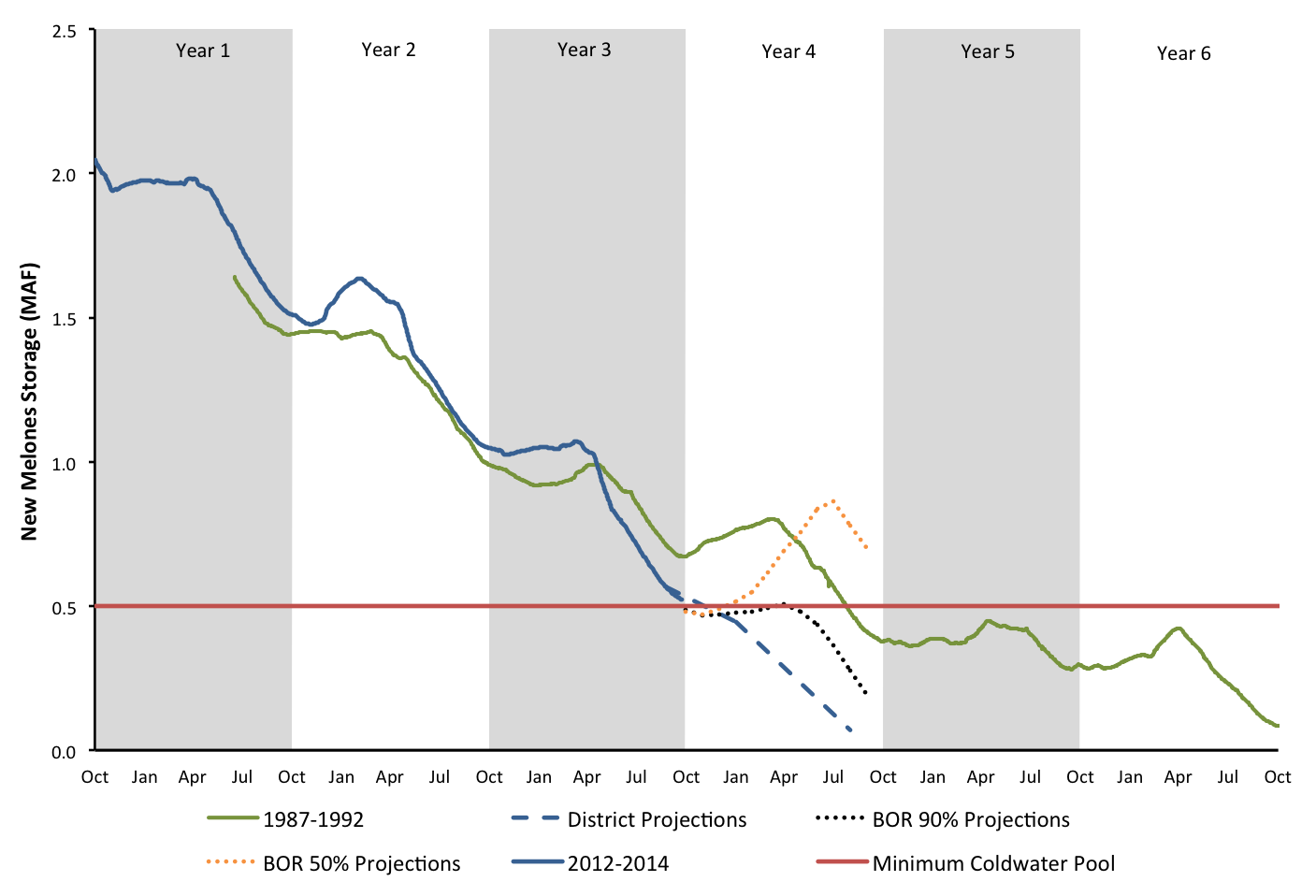 Is the end of the California drought near? Early signs of an El Niño developing this fall brought hope to many that California might have some relief from the drought, but there is no guarantee that a wetter than normal rainfall is on the way, even if an El Niño occurs. The National Oceanic and Atmospheric Administration (NOAA) Climate Prediction Center is currently forecasting that any El Niño effect this year will be weak. It’s possible that the drought could be far from over, as the last extended dry period lasted six water years (1987-1992). So from a management perspective, it is best to plan for the worst-case scenario and save as much water as possible, because there is ultimately no way to know what is in store for the new water year.