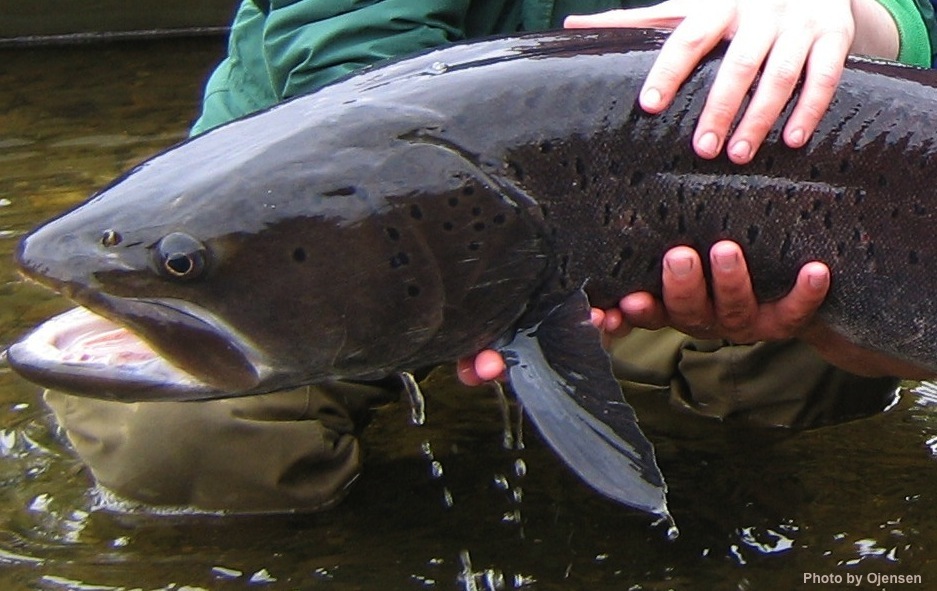 In honor of World Wildlife Day this week, we wanted to shift our usual focus from fisheries of the West Coast and the Mekong River basin, and shine our Fish Report spotlight on a fascinating fish in another part of the world: the taimen of Eurasia. Taimen are the world’s largest salmonids, and include five species in the genera Hucho and Parahucho. Some species within these genera exhibit sexual dimorphism as evidenced by striking color differences between males and females: males can be bright red in color, while females exhibit more muted coloration. Taimen are native to Eurasia, and inhabit the waters of Russia, Mongolia, China, Korea, and Japan.

The five species of these salmonid giants include the Siberian taimen (Hucho taimen), Sakhalin taimen (Parahucho perryi), Sichuan taimen (Hucho bleekeri), Korean taimen (Hucho ishikawae), and Danube salmon (Hucho hucho). Siberian taimen are likely the most widely known species, having been featured on such shows as River Monsters and Monster Fish. This species can reach lengths of over two meters (or six feet), and can live up to 30 years old – much longer than its Pacific salmonid relatives (such as Chinook salmon, sockeye salmon, and coho salmon). Taimen are known to be voracious predators, and have earned the nickname “river wolves” due to a practice of hunting prey in packs.

Similar to the salmonids we know in the Pacific Northwest, taimen exhibit a diverse range of life histories, including anadromy (making migrations to saltwater) and residency (living solely in rivers). Taimen are also iteroparous (repeat spawners) like rainbow trout (Oncorhynchus mykiss). According to the International Union of Conservation of Nature (IUCN) Red List, the these species are listed as either vulnerable (Siberian taimen), endangered (Danube taimen),  critically endangered (Sichuan taimen, Sakhalin taimen), or data deficient (Korean taimen). Causes of population decline include habitat loss and fragmentation, poor water quality, and over-harvesting (Holcik et al. 1988 as cited by Gilroy et al. 2010).

Compared to many of the Pacific Northwest salmonids, research into taimen is still quite new, but some researchers are already making use of cutting-edge technology to study these giant fish. A recent paper on the critically endangered Sakhalin taimen investigated adult Sakhalin taimen passage at a fixed concrete weir in the Karibetsu River in northern Hokkaido Island, Japan, using a video camera and a sonar camera from Sound Metrics Corporation (Rand and Fukushima 2014). Similar to a setup FISHBIO used to evaluate restoration sites on the Sacramento River (see Seeing What Lies Below), this study used the video camera for above-water visual identification, and the Adaptive Resolution Imaging Sonar (ARIS) camera for underwater monitoring. The video camera was used to identify the sex of Sakhalin taimen based on color, and to determine successful passages at the weir. Footage captured from the ARIS camera was used to estimate fish lengths.

Results from this study characterized run timing of taimen (April through May) in 2013 and 2014, indicated low abundance of the species, revealed that male taimen generally migrate to spawning sites before females, and confirmed that the combined use of video and sonar cameras provides more insight than just one type of camera monitoring. Further, the researchers concluded that fishing pressure might negatively impact the abundance of Sakhalin taimen in this watershed due to the lack of fishing regulations, despite the popularity of this species for catch-and-release fishing.

Studies using passive monitoring techniques, while not without limitations, can prove very useful for collecting data on fish that are considered threatened, endangered, or vulnerable to extinction. The ARIS camera and video monitoring are both non-intrusive technologies that do not affect fish behavior, and therefore allow for monitoring fish in a more natural setting. Continued advances in video monitoring systems and related software will increase the potential applications of tools such as the ARIS camera, and we are very excited about the future of this camera’s role in fisheries research and monitoring around the world.