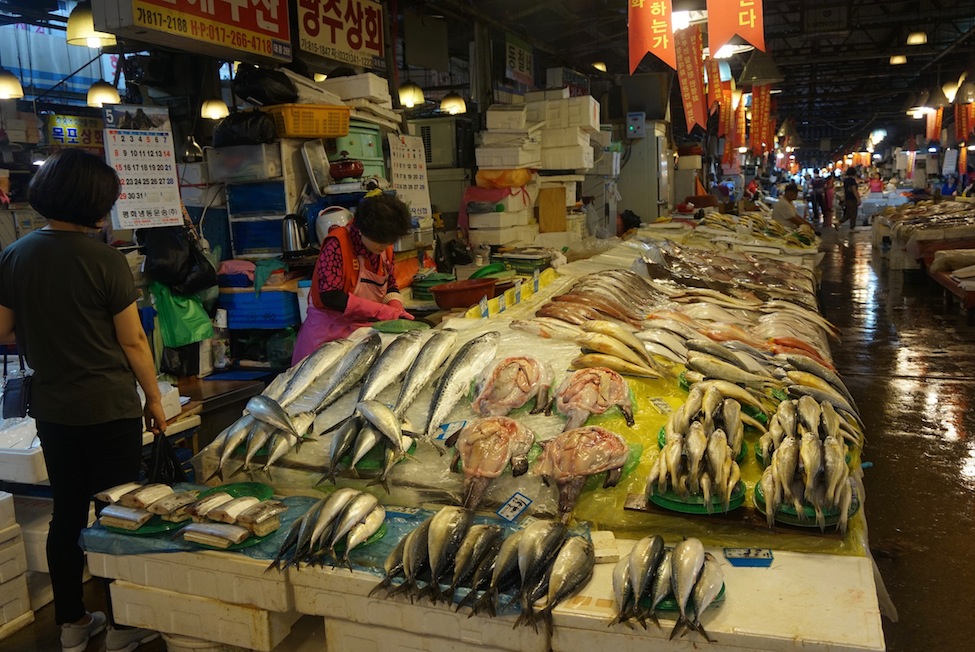 FISHBIO recently attended the World Fisheries Congress in Busan, South Korea, which explored the topic of “Challenges to Sustainable Fisheries and Safe Seafoods.” Conference speakers and sessions alike highlighted many challenges and innovations present ­­in both sectors. Seafood is an important industry in South Korea, so it was fitting for the conference to be held in Busan, the largest port in the country. Byung-soo Suh, the Mayor of Busan, remarked how South Korea has transformed from a recipient of international aid to a donor country, and that deep-sea fisheries played an important role in developing the country’s economy following the Korean War. On the theme of seafood, plenary speaker Dr. Goro Yoshizaki of Tokyo University of Marine Science and Technology gave an intriguing talk on research that uses germ cell manipulation to attempt to produce tuna eggs and sperm using mackerel as surrogates.

Several keynote speeches highlighted the role of fisheries population modeling in addressing fisheries challenges.  Dr. Terry Quinn of the University of Alaska Fairbanks examined the improvements in population modeling over the past 15 years, stating that “overfishing has been practically eliminated” in the United States. Dr. Mary Fabrizio of the Virginia Institute of Marine Science described challenges in studying fish recruitment, or the numbers or biomass of fish that enter the fishable population, which can vary greatly. She provided recommendations for improving recruitment models, such as using longer time series and avoiding calculating recruitment based on estimates derived from stock assessments. Dr. Ray Hilborn of the University of Washington presented data from a global database of stock assessments, and acknowledged that while there are complexities among fisheries, fish stocks are generally rebuilding in countries where there is good fisheries management. However, he noted that a lack of data prohibits the assessment of most fisheries in South and Southeast Asia, where catches can be very large.

The World Fisheries Congress has been held every four years since 1992, when it was planned without the help of a computer, using only snail mail and a telex machine. Though technology has evolved, the conference continues to offer opportunities for researchers to share their experiences with an international group of peers. Keynote speaker Dr. Kenneth Rose of Louisiana State University discussed the importance of establishing trust and collaboration in fisheries science, and noted several steps scientists can take to foster trust among each other and the general public. These include understanding oneself and how one performs in teams; respecting others by giving credit where it is due; and being aware of common sources of conflict such as authorship, conflicts of interest, and advocacy.

FISHBIO’s Mekong team was pleased to see that small-scale fisheries and inland fisheries were well represented at the conference through various sessions. Talks spanned the Canadian Arctic to the Amazon Basin, and several described methods for using fisher’s knowledge and participation to gather information about small-scale fisheries. These fisheries are often challenging to assess because the fishers are widely dispersed, and a large number of small boats, fishing gear types, and targeted species are often involved. Various tools are being developed for small-scale fishing, from models that use local fishers’ knowledge to validate assumptions, to an electronic logbook program created by OLRAC SPSS currently being used in small-scale shellfish fisheries in the Shetland Islands, among others. FISHBIO’s session on marine and freshwater protected areas showcased work from many countries, and highlighted the need for good communication among players to establish effective protected areas.

A recurring theme that emerged throughout the conference is the large-scale threats facing many fisheries around the world. Given the conference’s location in Asia, hydropower development in the Mekong Basin was a frequent topic of discussion, but similar changes are also planned in other regions like South and Central America. Climate change also poses many environmental challenges, such as the drought in the Mekong Basin that has affected many fisheries. Speakers such Ratana Chuenpagdee of Memorial University emphasized the importance of engaging communities to build stewardship and resilience in the face of these challenges. She and other speakers noted the importance of inspiring a new generation of scientists, conservation practitioners, and leaders who will understand the importance of these fisheries when making decisions that shape the future of various regions. FISHBIO’s session on technology highlighted some cutting-edge solutions for managing fisheries in the hydropower landscape. Audience members were intrigued to learn about PIT tags from Warren Leach of Oregon RFID, and about Whooshh Innovations’ novel transport methods for moving fish over barriers from Todd Deligan, to name a few. While sustainability challenges persist, conferences such as this one provide inspiring opportunities to explore potential fisheries solutions.