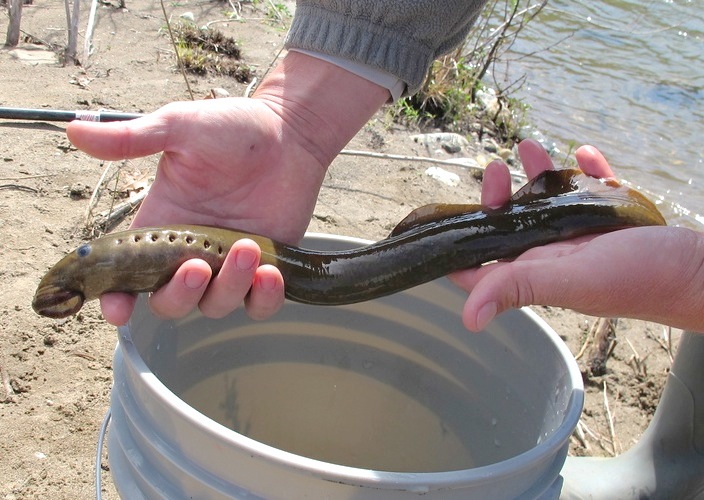 The Eel River, the third largest watershed in California, drains approximately 3,684 square miles and eventually empties into the Pacific Ocean near Fortuna, California.  Considering the name of this river, it might seem logical that eels reside in its waters.  And at first glance, the fish above might appear to be an eel – but upon closer examination, it’s clear that this is, in fact, a lamprey. Lampreys are commonly (and incorrectly) referred to as eels, and this mistaken identity is likely the reason the Eel River got its name.

Pacific lampreys, Lampetra tridentata, are a slender and long-bodied fish that have some similar characteristics to eels. However, lampreys are quite distinct in that they are jawless fishes with a sucking-disc for a mouth, cartilaginous skeletons, and gill pores. Eels, on the other hand have jaws, bony skeletons, and opercula covering their gills. Like Pacific salmon, Pacific lampreys are anadromous, returning to the Eel River to spawn typically between March and July (Brumo et al. 2009, Gunckel et al. 2009).  Tribal harvest for this species occurs during the period when adults first enter the Eel River between January and June. Pacific lamprey are harvested by the Wiyot people of the Eel River watershed; however, declining lamprey abundance in the Eel River has reduced the number available to harvest. Though there is no accurate estimate of population decline, historical accounts from Wiyot tribal members reveal that this population was once abundant (Stillwater 2010).

Pacific lamprey historically occupied the waters from Mexico along the Pacific Rim to Japan (Luzier 2011).  Tribes throughout the Pacific Northwest rely on Pacific lamprey as a food source, for medicinal use, and for ceremonial and cultural practices. Pacific lamprey may serve as an important supplemental food source, or buffer, for when other prey such as salmon are less abundant, or are preyed on salmon by marine mammals (Close et al. 1995, Stillwater 2010, CRITFC 2011).  Pacific lampreys are also an important food source for wildlife such as birds and mammals, and replenish streams with nutrients when they die.  Populations of Pacific lamprey have declined throughout the Pacific Northwest and are impacted by habitat fragmentation from dam construction, poor water quality, habitat loss, and flow management (Stillwater 2010, CRITFC 2011, Goodman and Reid 2012). Further population decline in this species puts an important ecological, cultural, ceremonial, dietary, and medicinal resource in jeopardy.