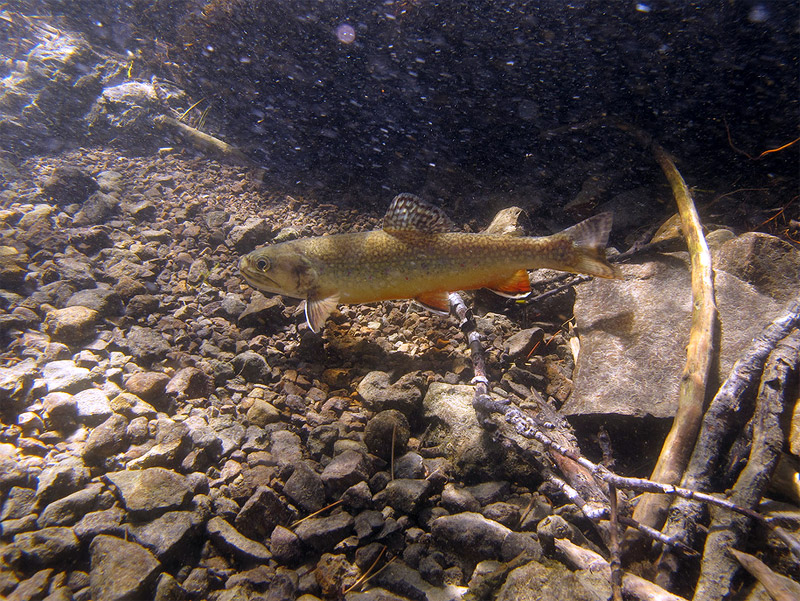 We photographed this brook trout (Salvelinus fontinalis) in an alpine stream in the Central Sierra Nevada. Several were seen intermingled with rainbow trout, feeding on drifting insect larvae. Native to the northeastern U.S. and eastern Canada, brook trout were first introduced to California in 1871 and by 1890 they were established in alpine lakes and streams throughout the state. Though brook trout are often coveted by fly fishermen, they are actually quite small for a salmonid, only growing to 12 inches (30 cm) in their 4-5 year lifespan. Brook trout can demonstrate rapid growth of up to 6 inches (15 cm) by the end of their first year if food is abundant and trout densities are low, but they are better known for their somewhat slow growth rate. A good example of this slow-growing trait is the case of brook trout that were stocked in Bunny Lake of Mono County. The adult fish only reached 9-11 inches (24-28 cm) after living up to 24 years. These were the oldest brook trout on record, they only reproduced once and not until they reached 15 years of age (Reimers 1979). Their stunted growth rate was attributed to low food abundance. Once the trout were introduced to Bunny Lake in 1951, most of the invertebrates were extirpated in the first year!