If you haven’t heard yet, we are being overrun by alien invaders! No, not little green men from space, but tiny gastropods known as New Zealand mudsnails (Potamopyrgus antipodarum). These tiny freshwater snails (pictured below on the left) were first detected in the United States in the Snake River in 1987 and have since spread throughout the Western United States. It’s not clear how they were first introduced, but they most likely hitched a ride on the wading boot of some unsuspecting angler. 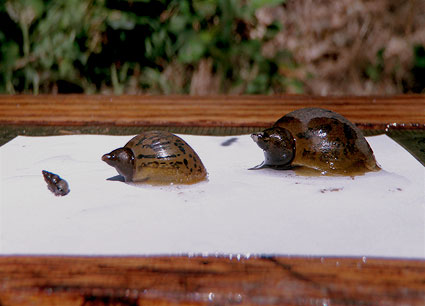 New Zealand mudsnails are problematic since they disrupt the food chain by outcompeting native snails, like the pond snails pictured on the right (Lymneae sp.), and other aquatic invertebrates, leading to sharp declines in native populations. This in turn can negatively affect fish populations, by replacing the native prey with a less nutritional source. The mudsnails pass through fish guts undigested, without providing any nutritional value. With no natural predators, like the trematode parasites found in their native ecosystem, their populations have been rapidly expanding. Each female can produce approximately 230 young per year, and the species can reach concentrations above 300,000 per square meter. The tiny snails are effective at hitching a ride on fishing gear and can survive up to 30 days out of water thanks to their ability to seal their operculum. Many resource agencies have initiated educational campaigns to control the spread of mudsnails, such as California Department of Fish and Game’s “How to Prevent the Spread of New Zealand Mudsnails through Field Gear.”