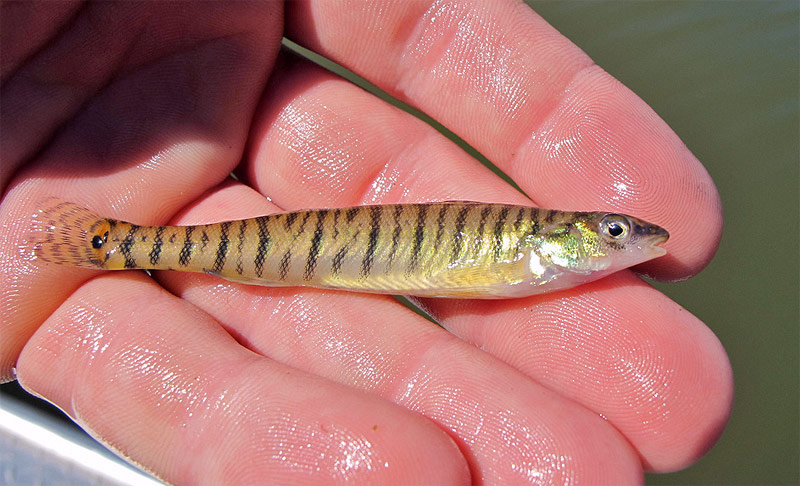 Here’s case of an unintentional, slightly embarrassing, fish introduction in California. The bigscale logperch (Percina macrolepida) is darter native to the Gulf Coast river systems. In 1953, the U.S. Fish and Wildlife Service (USFWS) stocked several ponds on Beale Air Force Base in Yuba County with largemouth bass and bluegill (also not native) to provide recreation opportunities to military personnel. The introduced game fish were collected from the Trinity River in Texas, but unfortunately, the USFWS failed to check the shipment for undesirable species and inadvertently introduced bigscale logperch (USGS FactSheet). During wet years the ponds overflow into Bear River, which flows into the Feather River and then into the Sacramento River. Within 15 years the bigscale logperch became widespread throughout the Delta and its associated reservoirs.  The effect of the bigscale logperch on the freshwater ecosystem is not well studied, but their proliferation has demonstrated how quickly an unintended introduction can become established in the Delta.

Bigscale logperch have a similar life history to sculpin (see Life on the Bottom), in that they lack a swim bladder and spend the majority of their existence occupying stream and lake bottom habitat. They remain sedentary when not feeding and swim with quick bursts for short distances. They are opportunistic feeders, consuming a variety of benthic invertebrates and fish eggs, depending on what is dominant. Their tiger striped coloration makes them well suited for blending in with emergent vegetation in shallow streams and reservoirs.