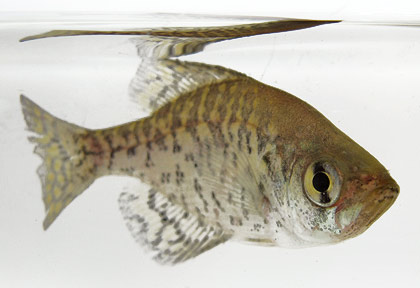 Although not as popular as largemouth bass or rainbow trout, crappie (Pomoxis annularis, white crappie; P. nigromaculatus, black crappie) are highly prized game fish. According to the 2006 National Survey of Fishing, Hunting, and Wildlife-Associated Recreation, over 6.2 million anglers spent 91 million days fishing for crappie. With the exception of black bass, freshwater anglers spent more days on average fishing for crappie than any other species. The popularity of crappie as a game fish is probably due to a combination of their widespread distribution, ease of catch, and good taste. Crappie tournaments occur annually throughout the Southern United States with fishing groups such as the American Crappie Association promoting the sport. They can be caught on a variety of artificial lures and live bait. Crappie are said to have a paper-mouth because of their thin mouth membranes that can tear easily with too strong of a hook set or too stiff a rod.