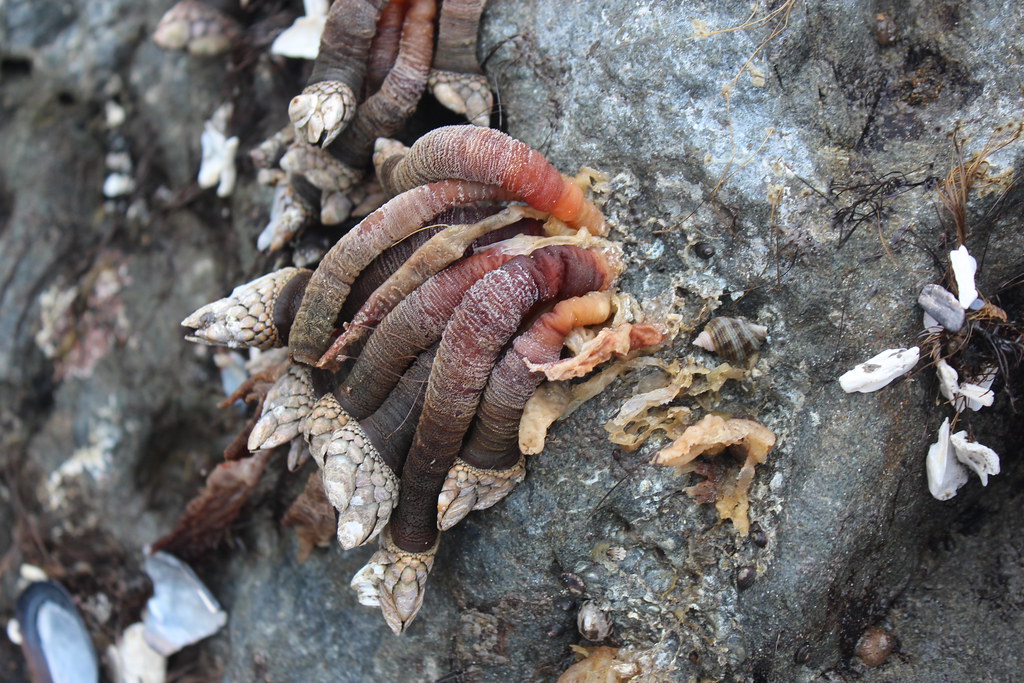 While a crashing wave would make most people say, “Heads up!,” for barnacles it’s more like, “Feet up!” Barnacles are animals that cement themselves to surfaces head first. The home that they settle on as larvae is the home they commit to for life, since they secrete a glue-like substance to stay in place. This “glue” is so strong that it has even been studied for potential use in dentistry. There are two different shapes of barnacles: stalked (gooseneck) barnacles and sessile (acorn) barnacles. All barnacles have a hard outer shell that consists of multiple white plates pieced together in otherworldly patterns. Sessile (acorn) barnacles’ hard plates are attached directly to surfaces, while stalked (gooseneck) barnacles have a long fleshy stalk, known as a peduncle, that they use for attachment. Gooseneck barnacles’ hard outer plates are found at the end of the peduncle, which earn this animal its comparison to a goose’s head and neck.

Barnacles start off life as tiny plankton, and drift along in search of a place to call home. Adult gooseneck barnacles can release compounds into the water that larvae can sense. The baby barnacles settle near the adults, and then crawl around to glue themselves directly next to others like them. You almost never see one alone, but often big bunches – like a flock of geese. Barnacles are crustaceans, the same group as crabs and shrimp, and like these animals they go through molting, the process of shedding and growth of a hard exoskeleton. As opposed to animals like crabs, gooseneck barnacles keep their hard outer layer of plates, but shed a separate, inner exoskeleton that is the first layer of protection for their soft body. Each time they spit out that inner layer, new outer plates can push up on existing plates to help make space for the growing barnacle, similar to how sharks have layers of teeth that always fill in for lost ones.

If these creatures have their heads stuck to their chosen hard surfaces, how do they eat? Barnacles extend feathery feeding legs called cirri into the water to filter out food particles like the teeth of a comb. These feeding legs only come out when the barnacle is fully submerged in water. As animals that live in the intertidal area of the shoreline, barnacles are adapted to handle both air and water exposure as the tides change. When exposed to only air during a low tide, barnacles close up the opening in their shell, creating an airtight seal that holds in the water they need to breathe. Gooseneck barnacles are peculiar creatures that sit on their heads and eat with their feet. Next time you encounter some, take a moment to observe and appreciate the unique life that they live. As filter feeders, barnacles provide an important “water cleaning service” by taking in plankton, as well as other dissolved particles. Gooseneck barnacles are also food for some animals, including humans – in Spain and Portugal, they are considered a delicacy!

This story was written by Andrea Dempsey as part of an internship with FISHBIO.