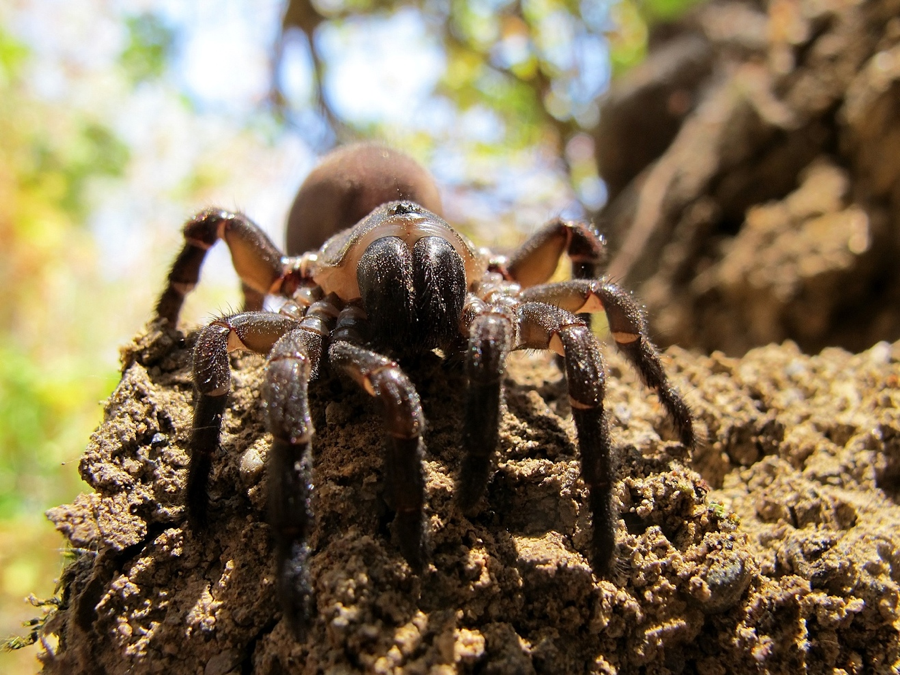 Recently, while out conducting snorkel surveys for trout (see Summer surveys) we stopped for a break between dives and noticed and an unusual D-shaped patch of earth positioned on the hillside next to the river. Upon closer inspection, we discovered it was a carefully crafted door to a burrow of some sort. Having never seen one of these before, our curiosity got the best of us, leading us to excavate the well-built den to reveal the inhabitant. We discovered the den to be occupied by a California trapdoor spider (Bothriocyrtum californicum). Now knowing what to look for, we discovered several of the well-camouflaged burrows in the same vicinity.

It turns out there are 9 genera and 120 species of trapdoor spiders inhabiting many places around the world. The California trapdoor spider is found along the Pacific coast. They are similar in appearance and closely related to tarantulas (see On the prowl), but are smaller in size, with shiny legs and less hairy abdomens. The most fascinating aspect of these spiders is the architecture they construct. They use mouth parts (chelicerae) equipped with digging rakes (rastella) to build tube-like tunnels in the sides of banks in disturbed areas. The tunnel is lined with silk and saliva, and capped with a perfectly fitted trapdoor, complete with a hinge. The tunnel serves as a shelter, a nursery, and a trapping device for prey.

Trapdoor spiders are ambush predators that hide behind their hinged doors. When they sense vibrations through silk tripwires, they quickly spring out of their burrow, grab their prey (whether an insect or other arthropod), and pull it back down the tube. These spider dens also provide good protection from outside predators. When under attack, the trapdoor spider uses its chelicerae to hold the lid closed, and at the same time braces its legs against the wall of the tunnel with a force 38 times its own weight! This resourceful predator is truly a force to be reckoned with in its own right.