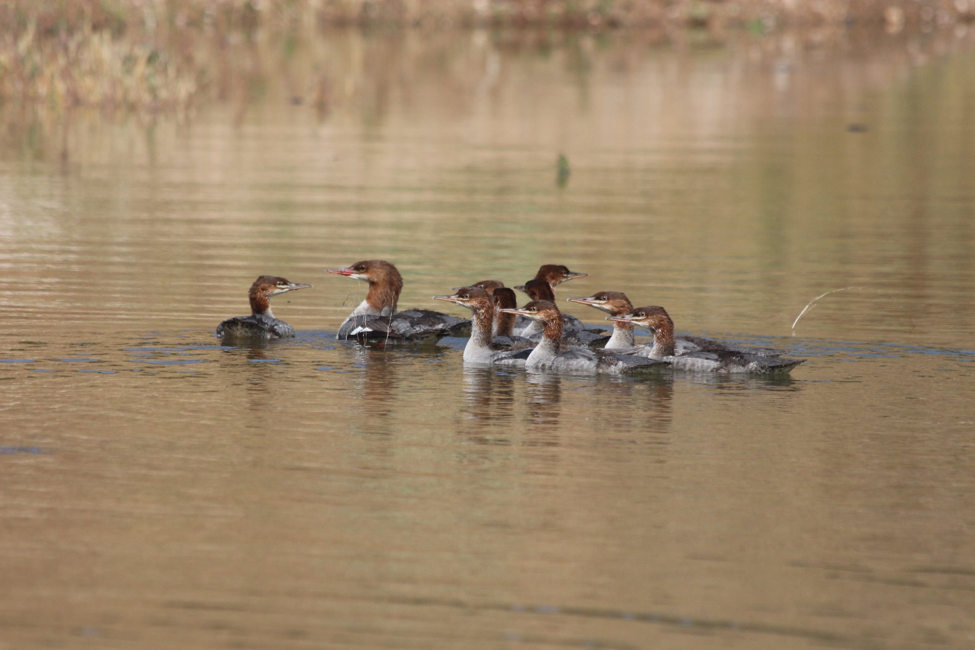 With some 50 species of ducks and geese found throughout California, the Common Merganser (Mergus merganser) might easily get overlooked as one of many ducks in a crowd; however, its unique characteristics are certainly worthy of notice. Although Common Mergansers are a member of the duck family, they have some traits that differentiate them from “typical” duck species. They have straight, narrow bills rather than flat, wide bills associated with many ducks, and also tend to grow larger than most duck species. Mergansers are in the group known as the “diving ducks” because they dive to catch their prey, rather than foraging at the surface like “dabbling ducks.” Fittingly, “merganser” comes from Latin for “plunging goose.” The striking coloration of these birds also sets them apart from other waterfowl. Adult males have white bodies with black backs, shimmering green heads, and bright red bills. Adult females have dappled-grey bodies, red bills, and cinnamon-brown heads with short crests. Both males and females look very similar as juveniles, having the same coloration as adult females but without head crests, as seen in the photo above. Adults of both sexes display white patches on their upper wings during flight.

Unfortunately, this unique duck species experienced a decline in North America between 1966 and 2014. According to the North American Breeding Bird Survey, populations decreased by about 65 percent during those years. However, Common Mergansers are now being used as indicators of environmental health because of their role as top predators in aquatic ecosystems. Like other waterfowl, Common Mergansers depend on healthy fish populations for both short- and long-term survival. Perhaps greater awareness about the importance of healthy waterways partly explains why the North American population now seems to be stabilizing or even increasing. Growing awareness about the importance of wetland conservation and fish population management will hopefully prevent the Common Merganser population from plunging in the future.