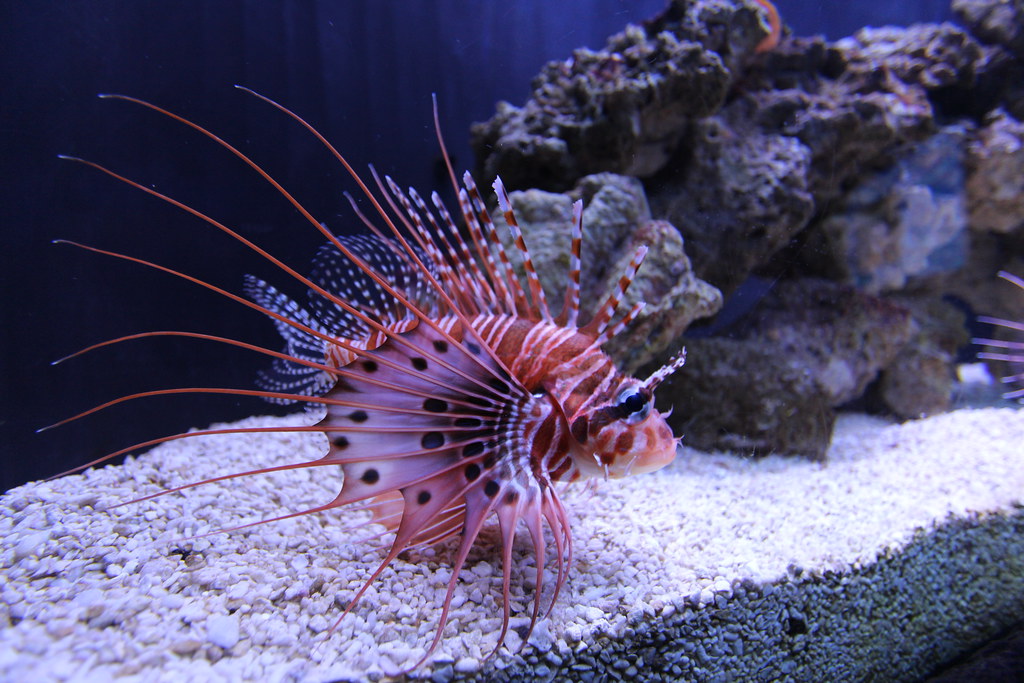 With the ocean facing many challenges, from pollution to declining fisheries to climate change, some issues inevitably go overlooked until their ripple effects become too large to ignore. After years of seeming insignificance, the introduction of lionfish (Pterois volitans/miles) to the western Atlantic Ocean has exploded into one such issue. Fisheries managers, marine scientists, and resource users are now addressing the impacts of lionfish invasion, as well as investigating novel population control methods to reduce further damage.

Lionfish are native to the South Pacific and Indian Oceans, and their Atlantic invasion probably began in the 1980s or 1990s as a result of Florida aquarium releases, although the exact way this occurred remains unknown. Both institutional and home aquariums could have contributed with a mixture of intentional and accidental releases. Many marine species have been introduced in this way over the years, and aquariums commonly keep lionfish as specimens. Other means of introduction such as intentional stocking or ballast water releases seem unlikely based on current evidence. Once lionfish gained a foothold off the Florida coast, they spread eastward to Bermuda and northward to North Carolina by way of ocean currents. They rapidly dispersed throughout the Caribbean region as well. With few predators to control their populations, lionfish could easily colonize new areas. As of 2014, lionfish had reached the Gulf of Mexico.

For many years, aquarium releases were not considered a significant issue for marine ecosystems; however, the lionfish invasion is providing good reason to think otherwise. Accurate estimation of lionfish populations has been difficult to achieve in many areas, but increasing public awareness is helping with this issue. The Bahamas are probably the most extensively studied region for lionfish invasion. A recent study found that lionfish abundance grew rapidly here between 2008 and 2010, increasing from 23% to almost 40% of overall predator biomass in the researched coral reef ecosystems. Coral reef ecosystems probably have the most to lose from lionfish invasion, as they are sensitive and already under a variety of stresses.

Lionfish have voracious appetites, so they can dramatically alter the community structure of an invaded area. They outcompete many native reef fish and reduce the abundance of forager species such as bicolor damselfish (Stegastes partitus) and striped parrotfish (Scarus iserti), creating cascading effects throughout the food web. If lionfish predation decreases herbivorous fish populations too much, it can increase algal growth, which has been seen in the Gulf of Mexico. Commercial and recreational fishing efforts may reduce lionfish populations in some places, but also run the risk of further damaging sensitive ecosystems through harvesting activities that could result in unintended native species losses.

A variety of economic consequences are also associated with lionfish invasion, many stemming from ecological impacts. For instance, lionfish competition could hamper restocking efforts of the Snapper-Grouper Complex, an economically important group of fishes in the Caribbean region – including snappers, groupers, tilefishes, and porgies among others – that feed on the same prey as lionfish. This group has been heavily exploited for recreation and commercial fishing, possibly allowing lionfish to take over their vacated niche in many reef ecosystems. Once lionfish have established themselves, it could become very difficult to recover the Snapper-Grouper Complex, with consequences for the Caribbean fishing industry.

On the upside, implementing tournaments and other organized events has recently proven successful for harvesting lionfish, often with the help of volunteer divers. Armed with hand nets and spears, volunteers can remove lionfish from sensitive ecosystems, and collected fish are often examined for research purposes. These harvested fish are also dished up in local restaurants as fillets with potatoes or pasta, helping to sustain the Caribbean economy. From 2009 to 2014, volunteer divers submitted almost 5,000 lionfish in Bonaire. Lionfish hunting tournaments also provide an effective mechanism for removal and local economic development. Participant expenditures can range from $5,000 to $60,000 per tournament in Florida and the Bahamas. In Curaçao, tournaments in 2012 and 2013 bagged 1,000–2,400 lionfish apiece, while culling tournaments in Belizean reefs removed over 8,000 lionfish between 2010 and 2016, demonstrating the potential for recreational fishers to supplement removal. While it may be near impossible to completely remove lionfish from the western Atlantic Ocean at this point, culling might help keep them at a controllable level while contributing to regional economies – and some novel recipes.