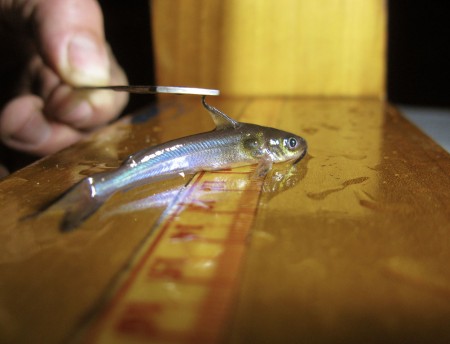 Channel catfish (Ictalurus punctatus) have been called “the trout of the ictalurid world” (McGinnis 2006) since they can be found in moderate to swiftly flowing streams, but can also survive in lakes, ponds and even the brackish Delta. We captured this juvenile in a Delta tributary 30 miles upstream, where juvenile trout are abundant. Adults remain sedentary, even when feeding, while juveniles tend to move about more extensively. Channel catfish predominantly perceive food with their sense of taste. Interestingly, they have taste buds over their entire external surface, with the greatest concentration on their barbells and gill arches (Kanwal et al 1987). Ictalurids (catfish and bullheads) lack scales, and to protect themselves from predators they have developed a large, sharp spine at the front of their dorsal fin (shown in the photo). As noted in a previous post, Daddy Daycare, channel catfish are not native to California rivers.