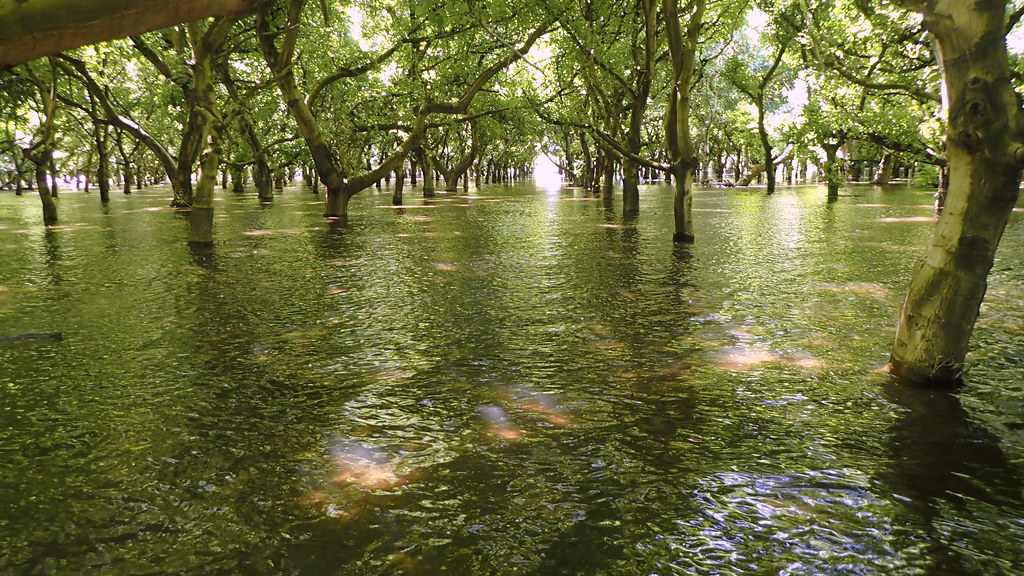 It seems like the ground is always moving in California. Earthquakes really grab your attention, but a slower, sneakier phenomenon with far-reaching impacts is land subsidence, where the ground literally sinks because of collapsing aquifers. When groundwater is pumped out of certain underground aquifers faster than it is replaced—particularly those in fine clay or silt soils—the aquifer loses the hydraulic pressure that supported it. Sediment falls in on itself, causing the aquifer to collapse and the ground to sink. Pumping groundwater helped California weather an epic drought, but that comes with consequences. Once collapsed, lost space in a clay aquifer cannot be refilled, meaning valuable freshwater storage space is lost forever. Luckily, unlike earthquakes, land subsidence can be much more predictable and preventable—and some innovative solutions are emerging to use excess storm water to replenish groundwater supplies.
While researchers have been studying subsidence in the San Joaquin Valley since the 1950s, a new study using NASA satellites reveals the problem continues to be a serious one. In the most comprehensive study of land subsidence to-date in the Central Valley, NASA researchers found areas that sank almost two feet between spring of 2015 and fall of 2016. Such sinking weakens infrastructure like levees, damages property, and can decrease the amount of water aqueducts can transport across the state. In response to previous studies on subsidence, the 2014 Sustainable Groundwater Management Act directed California’s water managers to work locally and cooperatively to achieve groundwater sustainability and help curtail future land subsidence. While the process is not reversible because collapsed aquifers cannot be refilled, land subsidence can be slowed or stopped by ensuring underground aquifers recharge at the same rate, or faster than, groundwater is extracted.
In the Central Valley, however, adding water to an aquifer is easier said than done. The wide floodplains and wetland areas of the historical Delta helped groundwater infiltrate into the soil, but the disconnected floodplains and minimal wetlands of the current Delta encourage water to run off instead. A search for solutions led researchers at UC Davis to partner with agricultural growers in California (an industry worth $17 billion per year covering some 7 million irrigated acres in the Central Valley) to test an idea: let winter storms flood agricultural fields in hopes of letting water absorb into the ground, while reducing the potential impacts of flooding. The plan involves using excess streamflow to flood dormant agriculture fields during high-flow periods when environmental flow requirements in the Delta have already been exceeded. This commonly occurs during the large winter rain storms that typify the Central Valley, when storms can produce up to 15 inches of rain over a few days. Recently published research shows that during an average year, approximately 2.6 million acre-feet of water is exported out of the Central Valley during times that could be used for groundwater recharge (Kocis and Dahlke 2017).
To test the feasibility of this technique, researchers flooded areas on two farms in 2014 and 2015, and found that more than 90 percent of the applied water passed through the root zone and into deep percolation. What’s more, plots receiving the winter flooding had a higher water content available to plants at the start of the growing season compared to unflooded plots (Dahlke et al. 2017), showing the flooding helped both groundwater and crops. Further, land use research found that approximately 5.6 million acres across the state have soils suitable for efficient groundwater recharge (O’Green et al. 2015), suggesting widespread use of this technique is possible across California. Scaling up this project would require building or improving water transportation infrastructure to handle moving heavy pulses of floodwater to farm fields, but it represents a viable approach in areas where such infrastructure already exists. The future of groundwater sustainability will most likely require a suite of methods to ensure underground aquifers are refilling, but techniques offering multiple benefits, such as aiding crops while also reducing flooding risk, present promising solutions.
This post featured in our weekly e-newsletter, the Fish Report. You can subscribe to the Fish Report here.