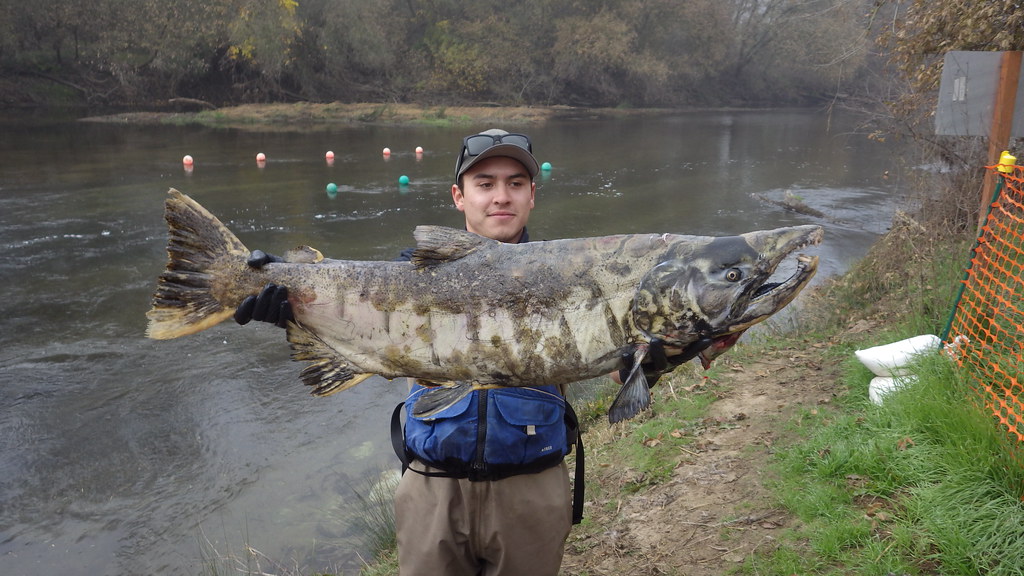 Those who fished for salmon decades ago often lament the bygone “good old days” of abundant, large fish. As it turns out, there is some truth to this sentiment. Negative trends in salmon sizes have been noted as early as the 1930s (as cited in Ricker 1980), prompting long-standing concerns about the consequences of losing the oldest, largest individuals in a fish population: decreased spawning productivity, destabilized populations, and putting fisheries in jeopardy. A recent publication in the journal Fish and Fisheries examined 40 years of salmon population data from across the West Coast and demonstrated once more that older, larger Chinook salmon are becoming increasingly rare across most of the species’ North American distribution.
The age (and consequently, the size) at which a salmon becomes reproductively mature is a heritable trait that is passed from parents to offspring. Since salmon only reproduce once during their lifetime, the timing of this event can have major consequences for a salmon population. Typically, reproducing later at a larger size brings several benefits, including more and larger eggs for females and increased access to mates for males. However, the longer a salmon stays in the ocean, the longer it remains exposed to risks like being caught in fisheries or being eaten by predators. If these threats outweigh the benefits of reproducing later in life, salmon that reproduce at younger ages (and smaller sizes) will become more prevalent over subsequent generations, and pass those traits on to their offspring. Such selection towards younger ages can be influenced by fishing pressure during the ocean-dwelling phase of the salmon life cycle. Surviving one or two years of fishing seasons without being caught is more likely than surviving three or four, which gives the fish that return to freshwater sooner a higher chance of successful reproduction.
The recently published study evaluated age and size compositions of Chinook salmon stocks covering a large geographic range – from California to Alaska. The study included data on about 1.5 million Chinook salmon from 85 populations, collected over the past four decades. As expected, not all populations exhibited identical trends, yet the majority indicated similar patterns – the average age and size has been decreasing among the oldest (and typically largest) salmon that return to spawn. In contrast, the average size of younger fish (age 1 and age 2), particularly those originating from hatcheries, has been increasing. Size-at-age is among the important factors that determine whether a given fish will remain at sea for another year or reach maturity and return to freshwater to spawn. As younger fish are now larger at a given age, they are more likely to reproduce at younger ages. Juvenile fish released from hatcheries often grow faster and are therefore larger than their river-reared counterparts, having benefited from controlled rearing conditions and abundant food. Generally, a faster growth rate in freshwater is associated with maturing at a younger age.
The authors also highlight a new group of suspects that may be contributing to this size trend: marine mammals. Sea lions, seals, and killer whales have greatly increased in abundance since they were afforded protection by the Marine Mammal Protection Act and the Endangered Species Acts in the 1970s. In particular, the authors hypothesized that killer whales have contributed to a shift in Chinook salmon age structure, as many killer whale populations have doubled or tripled in the past 40 years. Certain populations feed selectively on large, four- to six-year-old Chinook, and have been estimated to consume more than 10,000 metric tons of Chinook salmon in 2015 between southern Alaska and California. Killer whale predation is likely most pronounced between south-eastern Alaska and Washington, whereas the southern salmon populations that do not exhibit long coastal migrations are least affected. While rebounding populations of protected species can undoubtedly be celebrated as a conservation success, long-term management strategies for predators and prey will have to include the difficult task of accounting for the potentially conflicting management goals for these species.
The trends in size at age of maturity is weaker in California than in more northern populations of Chinook salmon, since there are fewer older fish to begin with. It is likely that selective forces other than marine mammal predation, including fishing pressure and hatchery practices, played a larger role in bringing about the currently observed age structure of Chinook salmon in California’s large, salmon-bearing streams. As Ricker postulated nearly 40 years ago, continued selection towards younger ages will culminate when “almost all the female spawners are of age 3, and the males are mostly jacks of age 2.” In a future Fish Report, we’ll describe current data from Central Valley streams that seem to indicate selection towards younger adults has made this prediction come true. Stay tuned!
This post featured in our weekly e-newsletter, the Fish Report. You can subscribe to the Fish Report here.