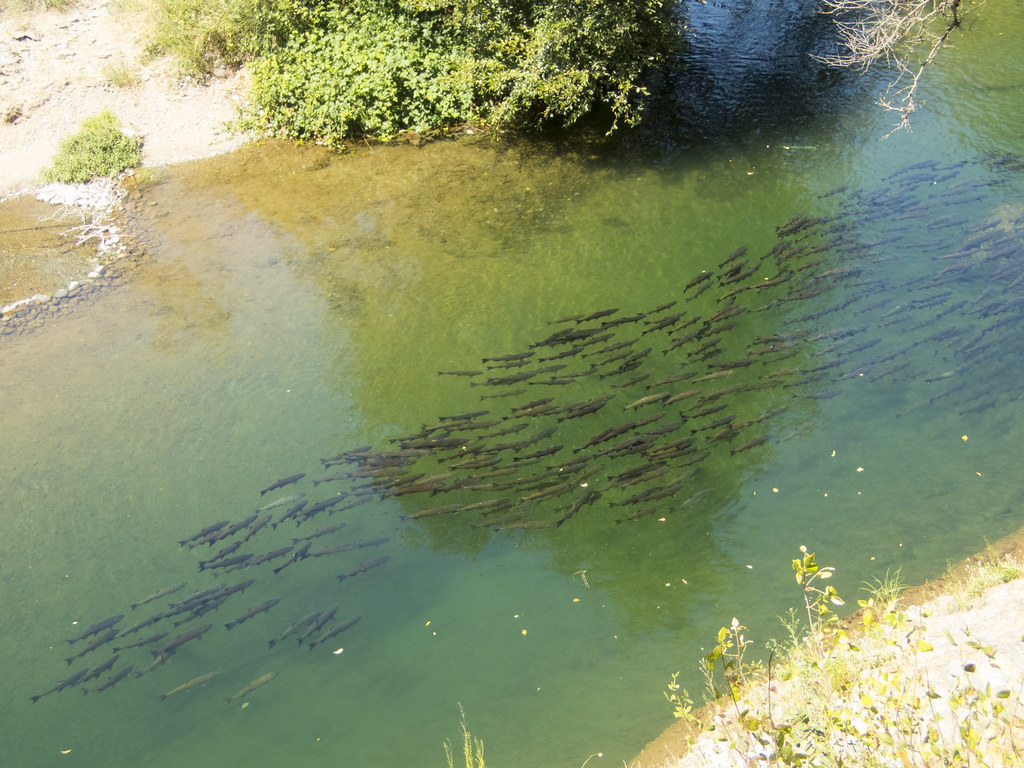 California’s cold-water species like salmon and trout face an uncertain future in a warming world. A recent report by the University of California, Davis and California Trout called SOS II: Fish in Hot Water: Status, Threats and Solutions for California Salmon, Steelhead, and Trout, suggests that nearly half (47 percent) of the state’s 32 distinct salmonid populations will become extinct in the next 50 years. Even more troubling, up to 74 percent of these species are likely to become extinct in the next 100 years under present warming conditions (Moyle et al. 2017). In response to these grim predictions, the California Natural Resources Agency (CNRA) recently released the Sacramento Valley Salmon Resiliency Strategy that outlines an ambitious plan to aid salmonid survival. Much like the CNRA’s Delta Smelt Resiliency Strategy produced last year, this report lays out actions intended to address both near- and long-term issues facing several Endangered Species Act (ESA) listed species, which include winter- and spring-run Chinook salmon (Oncorhynchus tshawytscha) and Central Valley steelhead (O. mykiss).

The CNRA proposes an aggressive strategy that involves a wide variety of habitat restoration and rehabilitation actions throughout the Sacramento-San Joaquin Delta and the upper reaches of the Sacramento River to improve at-risk species viability and resiliency. The actions intend to focus the state and its partners on relieving known and future stressors, and many are ambitious with 5- and 10-year timelines. Many focus on reducing risks to salmonids during the migratory periods of their lives, and therefore target the freshwater systems in which salmonids spawn, rear, and migrate. Several biological objectives proposed for the Sacramento River include improving productivity by restoring spawning habitat, improving incubation temperatures, increasing juvenile survival, supporting all migration conditions for various run types to maintain diversity, and reducing hatchery influence on wild populations.

Many of the suggested actions promote the reintroduction of salmonids to various tributaries of the upper Sacramento River, such as Battle Creek and the McCloud River, while improving access to Deer, Mill, Antelope, and Butte Creeks. Other projects aim to promote habitat restoration, remove defunct pumping infrastructure, improve hatchery performance, reduce entrainment risks (including fish screen installation), and further investigate the impacts of predation on rearing and out-migrating juvenile salmonids. The proposed actions intend to promote the Central Valley Project Improvement Act (CVPIA) salmonid doubling goals, which hope to achieve the following natural production targets in the Sacramento River: 230,000 fall-run, 68,000 late fall-run, 110,000 winter-run, and 59,000 spring-run Chinook salmon (USFWS 2015). In addition, the resiliency strategy intends to promote the recovery criteria described in the Final Recovery Plan for winter- and spring-run salmon and steelhead, including supporting the removal of these at-risk species from ESA listing and promoting effective partnerships with regional stakeholders (NMFS 2014).

Many of the proposed actions will require cooperation of several state and federal agencies, as well as public and private interests, to be effectively implemented. The strategy draws from information synthesized by the National Marine Fisheries Service (NMFS 2014) and conceptual models related to winter-run Chinook population dynamics developed by the Salmon and Sturgeon Assessment of Indicators by Life-stage teams. While the resiliency strategy is a step in the right direction as a sound guiding document that aggregates several proposed strategies from the last decade of research, the focus on the Sacramento River does not address key salmonid needs in the San Joaquin River system. The SOS II report notes that all 32 species of California’s salmonids are at risk. Similar measures are needed in a comprehensive strategy that includes the entire Sacramento-San Joaquin Delta and its tributaries, or we could still risk losing many of these diverse and iconic species.