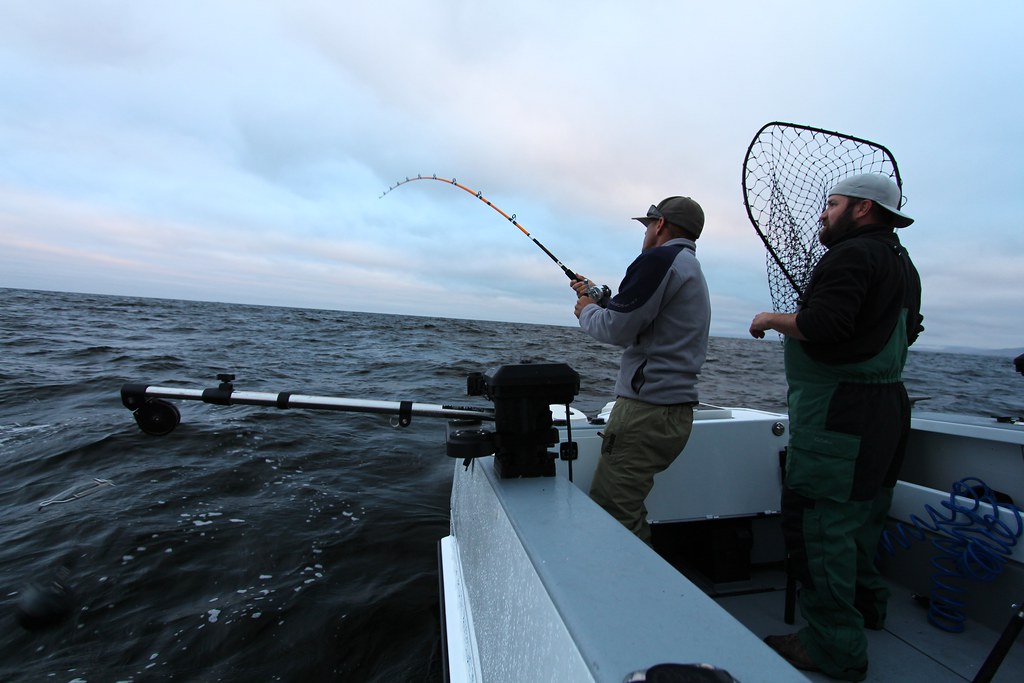 It’s time for our yearly review of the Pacific Fishery Management Council’s (PFMC) Review of Ocean Salmon Fisheries. This is the report that PFMC publishes annually on the previous year’s salmon fisheries along the West Coast. The report details harvest totals and socioeconomic benefits for the California ocean fishery, as well as escapement totals, or the number of salmon that “escaped” the fishery and returned to the Central Valley. The report also provides an opportunity to compare these numbers with the preseason prediction that was used to set harvest regulations for that year. Inaccurate preseason predictions can have severe consequences: an underestimation impacts commercial fishers because preset harvest limits may be too severe, while an overestimation of the population can lead to increased commercial harvest and reduced escapement, with low numbers of fish available for in-river recreational fishing. In 12 of the last 14 years, PFMC predictions have overestimated the size of the population (Figure 1), which in some years has led to higher than expected harvest rates and reduced escapement to Central Valley streams. However, in 2018, the preseason forecast was remarkably accurate. Figure 1. Percent difference from PFMC average annual preseason forecast relative to the actual SI observed, 1985-2018.
Results of the 2018 fishing season in California reveal a rebound in both harvest and escapement totals for the Central Valley, likely reflecting lessening impacts of the recent historic drought as well as a more accurate preseason forecast of salmon abundance. In California, the PFMC report focuses primarily on fall-run Chinook salmon in the Sacramento River Basin, as this population contributes the majority of fish caught in the ocean fishery. The metric used to represent this abundance is the Sacramento Index (SI), which is the total number of adult fish (ages 3-5) projected to be available in the ocean that will either be harvested or will escape to spawn in natural areas and hatcheries in the Central Valley. The preseason forecast for 2018 was an expected SI of 230,700 fish, with a total projected spawning escapement (in both hatcheries and natural areas) of 151,009 fish, based on fishing regulations and quotas. This escapement would have exceeded the management goal of 122,000 hatchery and natural area spawners.
PFMC reported that the 2018 salmon season resulted in an actual SI of 223,854 fish, meaning that the preseason forecast overestimated the actual population by only 2%. However, the escapement goal was not met due in part to higher than anticipated harvest rates. An estimated 105,739 fall-run Chinook salmon “escaped” the harvest and spawned in hatcheries and natural areas of the Sacramento River Basin in 2018, which is still below the management goal, but more than double the previous year’s escapement (44,574; Figure 2). Based on average escapement totals from 2016–2018, the stock remains “overfished” for the second consecutive year. Natural area spawners (71,924) did exceed hatchery returns (33,815), which was a reversal of the previous year, when more fish returned to hatcheries than natural areas (Figure 3). However, hatchery-origin fish likely made up a large percentage of the natural-area spawners as well, as the majority of hatchery fish are unmarked, and off-site releases of juvenile hatchery salmon have increased in recent years, which has been linked to higher straying rates of returning adults (Palmer-Zwahlen and Kormos 2015). Figure 2. Sacramento River Fall-run Chinook salmon ocean harvest, river harvest, and escapement, 1983-2018.
The increase in returning salmon in 2018 is encouraging given the lingering effects of a historic multi-year drought. Many of the fish that returned would have hatched during particularly tough conditions in 2015. This was evident in the San Joaquin River basin, where escapement totals decreased from the previous year. In 2018, a total of 15,428 fall-run Chinook salmon returned to natural areas of the San Joaquin Basin and 8,084 salmon returned to Mokelumne and Merced River hatcheries, representing 14% of the total fall-run escapement to the Central Valley. The total San Joaquin Basin escapement of 23,512 fish fell short of last year’s total (30,142), which had been the highest recorded escapement since 2002, and contributed 27% to the total fall-run escapement to the Central Valley. It is not clear why the proportion of escapement has been relatively high in the San Joaquin Basin over the past few years (usually it contributes less than 10%), but it may be due in part to increased trucking and release of hatchery smolts at off-site locations during the drought, and the resulting increase in stray fish from other basins. Figure 3. Sacramento River adult fall-run Chinook escapement 1970-2018. Source: PFMC 2019.
The commercial fishery harvest in 2018 rebounded slightly compared to previous years, with landings revenues (coastwide exvessel value, or price received at the dock) of $7.8 million, which was an increase from the prior year’s value of $5 million. However, the 2018 commercial salmon fishery was still low compared to previous years, at 67% of the 2013–2017 average of $11.7 million (Figure 4), and only 25% of the 1979–1990 inflation-adjusted average of $31 million. The total catch of 78,486 fish was also less than 60% of the average catch over the previous five years (2013–2017 average = 134,786). Commercial fishing effort (boat days fished) remained steady for the third consecutive year at 7,524 days. Only 456 commercial vessels made salmon landings in 2018, but this was an increase over the previous two years. The average California exvessel price for troll caught Chinook salmon decreased from last year’s all-time high of $10.10 to $8.39 per pound. However, the total exvessel value of the commercial fishery was the highest of the last three years (Figure 4). With a rebound in both escapement and harvest in 2018, anglers across the state are hoping that this trend continues in 2019. If forecasts are correct, they just might get their wish, as the pre-season estimate stands at 379,632 Sacramento River fall-run Chinook in the ocean this year, which is a 65% increase over last year’s projection. Fingers crossed that these projections are correct for the second year running. Figure 4. Commercial exvessel value and price per pound 2010-2019. Source: PFMC 2019.
This post featured in our weekly e-newsletter, the Fish Report. You can subscribe to the Fish Report here.