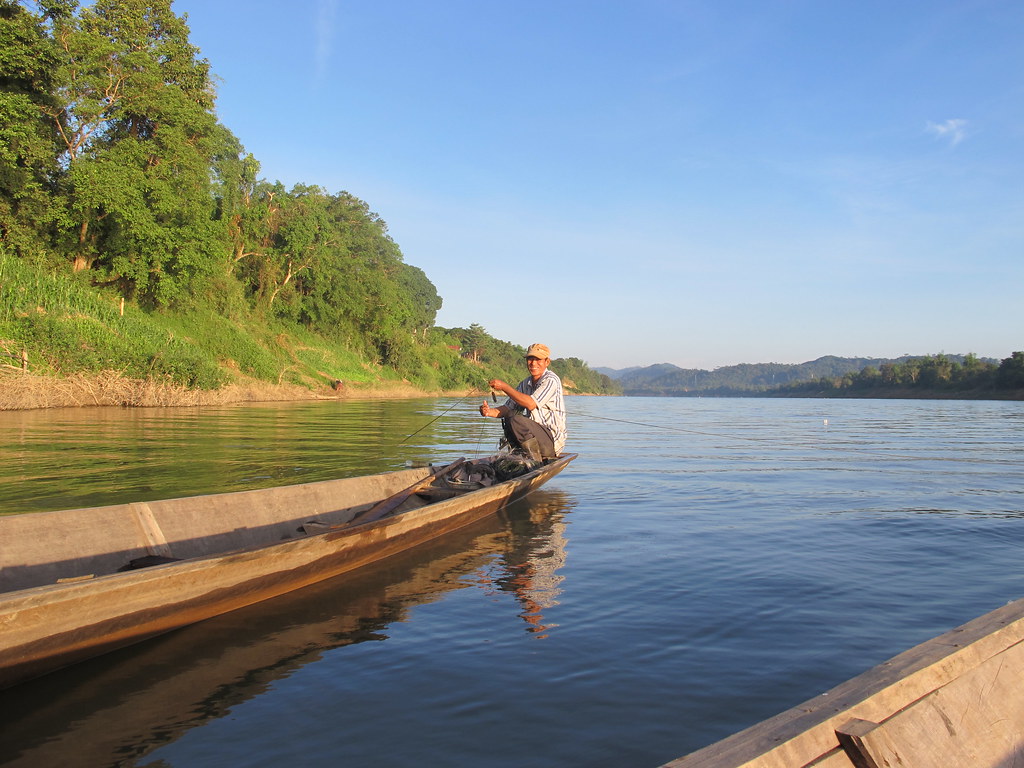 In today’s Flashback Friday, we examine why fish catch reporting is incredibly important.
When a fishing catch isn’t officially reported or documented, its contribution to food security and livelihoods is essentially invisible to researchers and managers. As FISHBIO well knows from our work in Southeast Asia, documenting fisheries catches can be challenging when fishers are dispersed over a wide geographic area, or don’t convene at a central landing site. A new paper recently published in the journal Proceedings of the National Academy of Sciences suggests that official catch statistics from around the world leave out a large portion of the actual freshwater fisheries harvest. Researchers from the University of Wisconsin–Madison and the Food and Agriculture Organization of the United Nations (FAO) documented a wide discrepancy in amount of wild-caught freshwater fish that people were eating in their homes compared to officially reported landings – about 65 percent of the freshwater fish catch was not reported in the countries surveyed (Fluet-Chouinard et al. 2018). This accounting problem matters because it means inland fisheries, which often provide crucial protein in impoverished countries, are being largely undervalued.
The researchers determined that it can be easier to document the fish people eat in their homes rather than the fish they catch, and use one to estimate the other. The team drew on household consumption data collected by national authorities in each country between 1997 and 2014, and compared these results to the official freshwater catch statistics reported to FAO during the same year. The dataset included more than 548,000 households in 42 countries across South America, Africa, and Asia, which account for just over half of the reported global inland fisheries harvest. In order to convert fish consumption into inland fisheries harvest, the researchers excluded any consumed fish from marine or aquaculture sources, and also accounted for the fish biomass that was discarded during cooking. Based on their calculations, they found that the fisheries catch estimated based on the household surveys was more than double the official reported catch in more than half of the countries surveyed – and was more than four times as high in one-third of the countries.
This paper represents the first time that fish catches have been estimated using household consumption surveys for many regions of the world. In some countries, the household consumption results matched the official reported catches, and a few countries even appeared to have overreported their fish catches. However, the overwhelming trend was underreporting of inland fishing harvest. Three countries alone contributed to about 42 percent of this “hidden harvest”: Bangladesh, Democratic Republic of Congo, and Zambia. Other countries in the top 10 for underreporting included Thailand, Malawi, Cambodia, and Myanmar. After applying their findings to the rest of the countries in the world, the team estimated that about 63 percent of the world’s freshwater fish catch goes unreported every year. The amount of these hidden harvests (6.3 million tons per year) could feed 36.9 million people as their only source of animal protein. When accounting for both reported and hidden harvests, the authors estimate global catch of wild freshwater fishes is about 16.6 million tons per year, which can feed more than 119 million people as their only source of animal protein.
The paper indicates that freshwater fish are clearly playing an important and underappreciated role in feeding people across the globe. Missing this hidden harvest can have serious consequences. Without fully accounting for how freshwater fisheries meet food security and livelihood needs around the world, decisions are being made that can impact these fisheries without a full picture of what could be jeopardized or lost. Given the scale of freshwater fish consumption, the authors point out it is unlikely that aquaculture can easily replace wild freshwater fisheries, a solution often proposed in the face of development. Although the officially reported global freshwater fish catch has been steadily increasing every year, the authors provide evidence that this may really be the result of reporting improvements, which allow hidden fisheries to be better documented, rather than actual increases in fish catches. They caution that the perceived continued increase in freshwater fish catches could actually be hiding fisheries on the brink of overexploitation. These findings on the magnitude of hidden harvests reveal a clearer picture of how much is at stake as mounting threats continue to degrade rivers, lakes, and wetlands around the world.
This post was featured in our weekly e-newsletter, the Fish Report. You can subscribe to the Fish Report here.