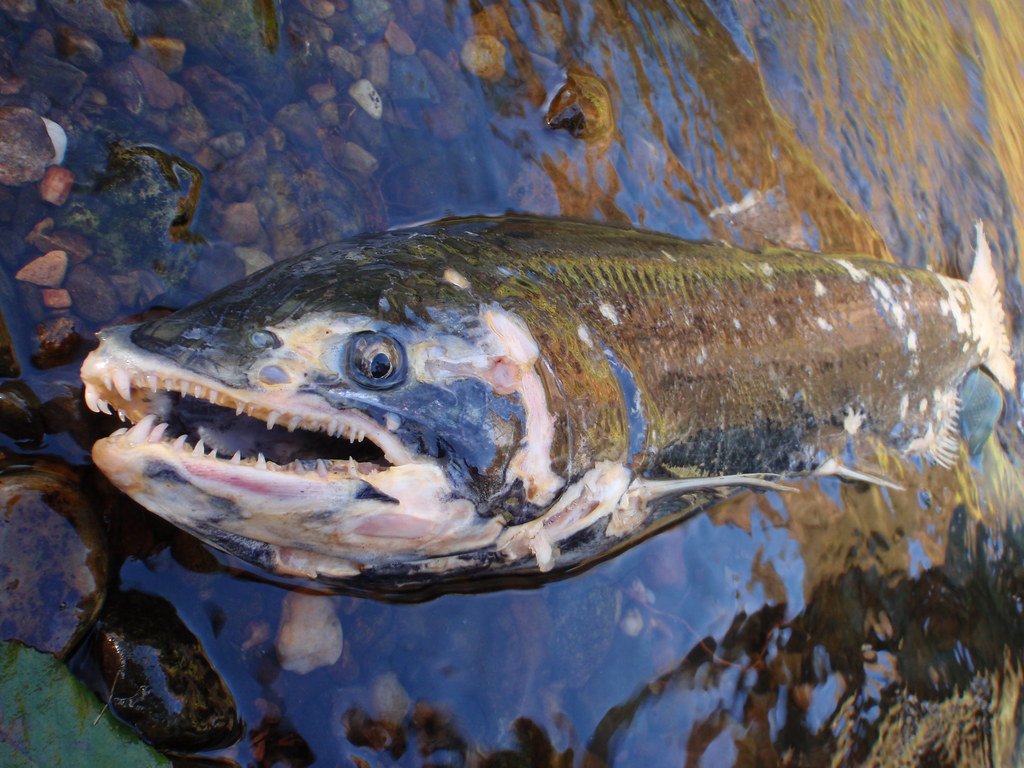 The life cycle of a salmon comes full circle when adults migrate upstream from the ocean back to their natal spawning grounds, where they lay their eggs and guard them until they die – that is, if they’re lucky. Alternate endings to this life cycle might be a leaping salmon intercepted by grizzly bears, documentary style, or their carcasses scavenged by wolves. Throughout their evolutionary history, young salmon have traveled to the ocean where they bulk up on krill and other prey rich in nutrients. When adult salmon migrate upriver to spawn, they provide a steady supply of these nutrients from the ocean to predators higher up in the food chain – and even to the trees of the surrounding forests. The salmon lifecycle is deeply intertwined with the nutrient cycle across an entire landscape.
The long-dependable supply of nutrients from salmon has been disrupted in most of California, and scientists have only recently begun to grasp the repercussions. Many top predators, including grizzly bears, eagles, and wolves, were either nearly or entirely eradicated from California by the 1930s. At the same pace, most of the rivers in California were dammed in the mid 20th century for water storage and flood control, blocking salmon from migrating to 48% of their original range (Yoshiyama et al. 1996). By analyzing the nutrient contents of soil, insects, and trees in forests surrounding rivers on the Pacific coast, scientists have shown that the amount of nitrogen and carbon in these ecosystems is directly related to the population density of migrating salmon (Reimchen et al. 2002). Scientists are able to tell that nutrients originated in the ocean by using a method called stable isotope analysis, which can detect versions of these elements that are normally only found in marine environments. The ratio of marine to-terrestrial isotopes of nitrogen in streamside forests is measured and then compared to forest areas away from streams to determine the amount that came from salmon.
These ocean-derived nutrients that salmon carry upstream are deposited on the landscape in the form of droppings from salmon-eating carnivores or the carcasses left behind (Hilderbrand et al. 1999). Salmon carcasses are eaten by scavengers or decompose into soil and become incorporated into plant life, supporting the entire forest food web. Salmon can supply 60 percent or more of the nitrogen found in streamside plants (Matthewson et al. 2003). Today, without predators to transfer these vital nutrients, most carcasses simply wash back downstream, throwing off the delicate balance of nutrients in rivers and forests. With the decline in overall salmon populations, the removal of their predators, and the blocking of their migration to high elevations, it is estimated that only 6-7 percent of the nutrients once supplied by salmon in the Pacific Northwest are now returned to the landscape (Gresh et al. 2011).
The effects on forests have not been thoroughly explored, but it is well known that a lack of nitrogen can limit the productivity of a forest (Vitousek and Howarth 1991). California’s forests are also showing unusual signs of stress and ecological imbalance. Some scientists have recently advocated for the reintroduction of grizzly bears and wolves in California, as their populations are declining elsewhere. While there is no plan for such a reintroduction, a few wolves have roamed into California on their own, and it remains to be seen if they will one day establish stable populations. Fish reintroductions or dam removal may also help salmon repopulate some of their original range in the Sierra Nevada. While these topics aren’t without controversy, it’s worth noting that robust populations of top predators are a sign of a healthy ecosystem. People and predators alike depend on healthy forests – and it turns out forests also depend on healthy salmon populations.
This post featured in our weekly e-newsletter, the Fish Report. You can subscribe to the Fish Report here.