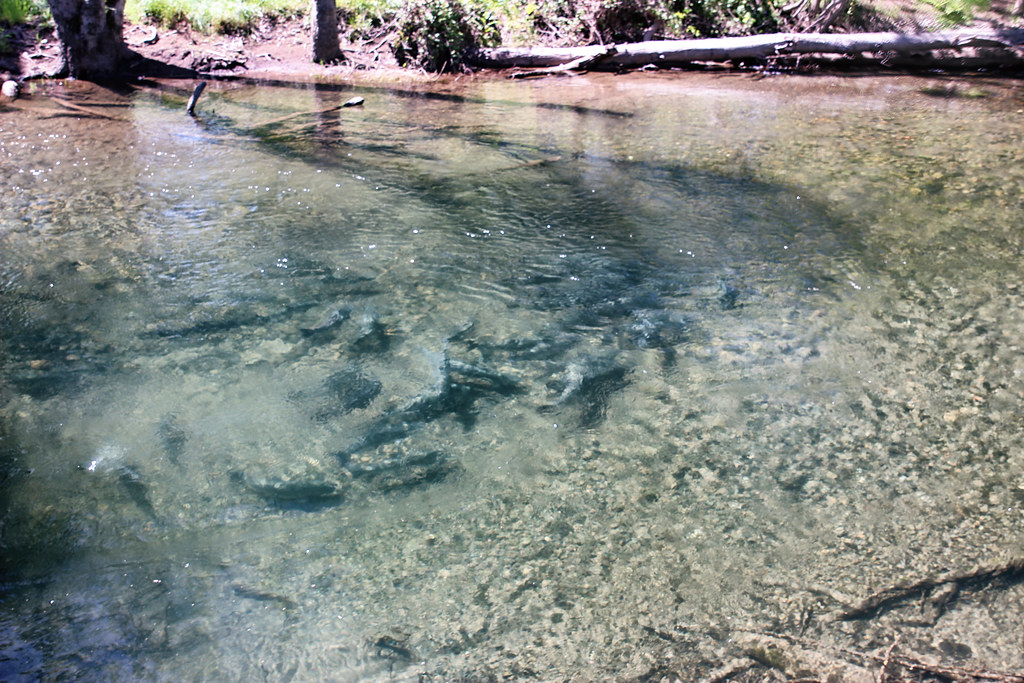 California’s salmon and trout have persisted to survive in spite of significant challenges both past and present, highlighting that they are remarkably adaptable creatures. The recent 37th annual Salmonid Restoration Conference hosted by the Salmon Restoration Federation, in Santa Rosa, California, centered around the question of “California Drought, Fire, and Floods – Can Salmon and the Restoration Field Adapt?.” The conference was attended by approximately 600 scientists, managers, and conservationists representing academic institutions, government agencies, non-profits, and consulting firms from across the West Coast. Like the species they study, the conference highlighted that those who work on salmonid restoration are equally adaptable. Field tours and workshops during the first two days of the conference focused on the growing impacts of marijuana cultivation on in-stream flows, innovative approaches to restoration in urban watersheds, and the process and value of restoring to a “stage 0” state in which the river has multiple, branching channels and is well connected to its floodplain. Presentations during the following two days expanded upon these themes, and covered additional topics such as floodplain restoration, salmonid foodscapes, management of dry season water supply, watershed resiliency, salmon life histories and habitat use, strategies for improving stream flow, the status of the soon-to-be undammed Klamath basin, and the likelihood of a renaissance for spring-run Chinook.
The plenary session began with Representative Jared Huffman, who serves California’s 2nd District in the U.S. House of Representatives. The congressman highlighted the numerous accomplishments and opportunities in the effort to restore California’s fisheries, including the prospect for new fish passages at Scott Dam on the Eel River, the impending removal of dams on the Klamath River, and his newly introduced Northwest California Wilderness, Recreation, and Working Forests Act, which if passed will create special restoration areas for salmon. He also stressed the importance of drawing upon science and past lessons-learned to improve water use. The plenary also included a presentation by Langdon Cook, author of Upstream: Searching for Wild Salmon from River to Table. Mr. Cook spoke about his experience exploring the connections between salmon and people, highlighting work by certain fishers to implement more sustainable harvest practices and efforts by scientists and conservationists to communicate the importance of salmon in areas like the Delta where there are many competing interests. Dr. Gordon Reeves of the U.S. Forest Service and Oregon State University also presented on approaches to conserving salmonids in the face of an increasingly extreme climate, and Dr. Ellen Hanak of the Public Policy Institute of California’s Water Policy Center discussed the reforms that will be necessary to reduce the vulnerability of California’s water to climate pressures, including the potential new approach of granting the environment a water budget similar to that of other water users.
Many of the presentations following the plenary focused on understanding and restoring natural processes, with particular attention given to the multiple benefits that can occur from allowing interaction of rivers and their floodplains. These included discussions of successful restoration efforts such as Sonoma Water’s Dry Creek Habitat Enhancement Project, and modeling approaches for planning and prioritizing restoration sites, such as cbec eco engineering’s efforts on the Lower American River. In addition, several presentations focused on incorporating often unaddressed parameters into habitat modeling, such as the foodscape approach being taken by UC Berkeley researchers that explores both the physical suitability of habitat for foraging and the availability of food in the habitat. Speakers acknowledged challenges of restoring salmonid populations in the heavily altered habitats of California rivers, but optimism and excitement over new approaches and new knowledge pervaded, particularly in presentations on genetic studies of spring-run Chinook salmon. Recent identification of the genetic basis for the spring-run ecotype has allowed scientists to determine that the genetic diversity underlying this life-history form has persisted in rivers like the Klamath despite the upper watershed being cut off by dams for many generations. This means that the population has the potential to rebound following dam removal.Increasingly frequent droughts, fires, and floods, as well as an expanding human population, present an uncertain future for both humans and salmon alike. Yet a proven history of adaptability and resilience among both salmon and people, as well as the development of new and innovative approaches to conserving salmonid diversity in the face of a changing climate, provide hope for a future with healthy ecosystems and fisheries.
This post featured in our weekly e-newsletter, the Fish Report. You can subscribe to the Fish Report here.