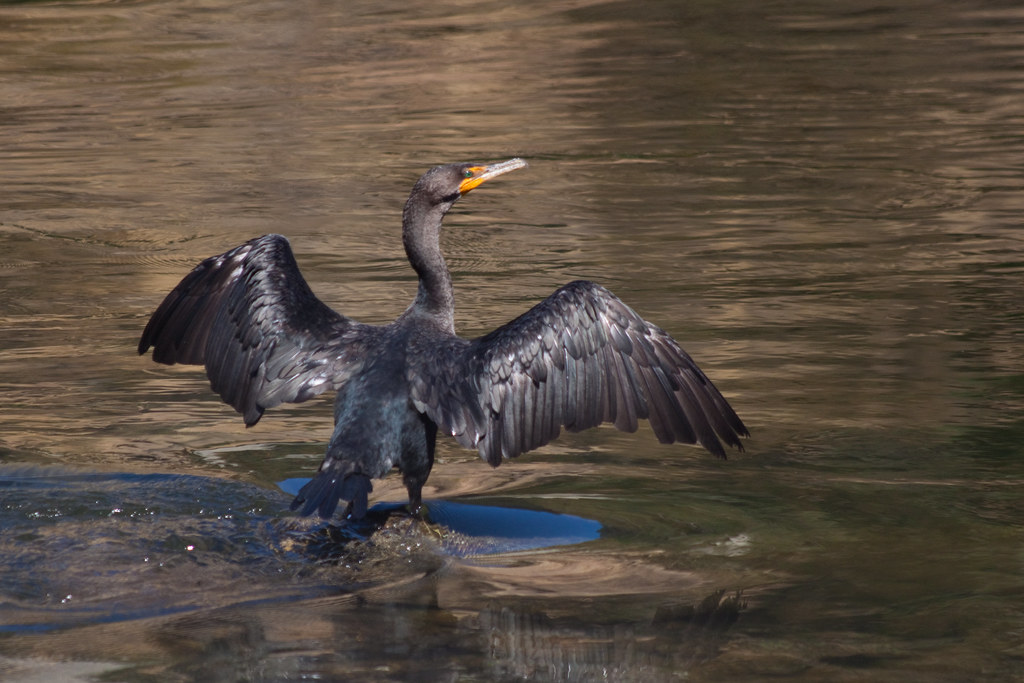 Fish are food for a wide array of species in rivers and lakes. As noted in our testimony before members of Congress, predation by nonnative fishes is an understudied source of stress on salmon and trout populations, particularly in the Sacramento-San Joaquin Delta. However, as some are quick to point out, birds are other predators that can also take a bite out of threatened fish populations, both inland and along the coast. We’ve previously described research on the impacts of Western gulls (Larus occidentalis) on young steelhead, but a number of other birds have also been studied for their salmonid snacking tendencies, including Caspian terns (Hydroprogne caspia), common murres (Uria aalge), and double-crested cormorants (Phalacrocorax auritus). These examples illustrate how salmon face a diverse array of threats from above and below the water line.
Caspian terns are a generalist predator that inhabit much of the west coast of North America and have been documented feeding occasionally on several species of salmonids throughout their range. Though some breeding populations of terns have declined in recent years in San Francisco Bay (down 36 percent between 2003 and 2009), Collis et al. (2012) found that juvenile salmonids comprised nearly a quarter (23 percent) of the diet of terns nesting in the North Bay. Further, terns along the Columbia River consumed as many as 679,000 smolts in 2001, a 46 percent increase from the previous year, which researchers think may have been related to reduced outflow from dams during drought conditions (Antolos et al. 2005). Several studies have noted that assessments of tern predation on salmonids may actually be underestimated due to gulls stealing food from terns, and terns may therefore capture more food than necessary to meet their own requirements. (Antolos et al. 2005; Osterback et al. 2013).
In the Gulf of the Farallones, a population of more than 500,000 common murres has been found to make a dent in the juvenile salmonid numbers as they exit San Francisco Bay. Recent research by Wells et al. (2017) observed that murres, which switch between eating young-of-the-year rockfishes and northern anchovy, depending on ocean conditions, also tend to consume more salmon when their diets shift toward northern anchovy, since the two fish species occur together in nearshore habitats. Juvenile salmonids represented as much as nine percent of observed murre prey, especially when weaker ocean upwelling conditions made fewer young rockfishes available. The researchers found that murres ate a larger proportion of salmon throughout the 2005 season, which they believe helped contribute to the collapse of the California salmon fishery in 2007 and 2008. During the mid-2000s, a study by Roth et al. (2008) estimated that the coastal population of common murres ranging between Cape Blanco, Oregon, and Point Conception, California, consumed more than 170,000 tons of prey per year. In comparison, some estimate that the hatcheries in California’s Central Valley are capable of producing approximately 30 million smolts per year (Huber and Carlson 2015), which equates to roughly less than 700 tons of total smolt biomass reaching the coastal ocean (Wells et al. 2017).
Given these observed impacts, some agencies have gone as far as culling a set number of individual birds per year, as is the case with the double-crested cormorants in and around the Columbia River. In 2015, the U.S. Army Corps of Engineers developed a plan to cull these, and other species, of cormorants to reduce predation on juvenile salmon and steelhead. A study by Collis et al. (1999) showed that salmonids constituted approximately half of the diet of cormorants nesting on Rice Island in the Columbia River estuary. The culling program has expanded into an ongoing control program and is authorized to take up to 2,408 double-crested cormorants and 4,058 nests in 2018. Such programs are controversial, and a colony of double-crested cormorants collapsed in 2016 on Oregon’s East Sand Island when 16,000 birds abandoned their nests following culling by the Army Crops. Managing bird predation on salmon isn’t easy, but it becomes much harder without data, which Grossman (2016) cites as distinctly lacking for the Sacramento–San Joaquin Delta. Predation is a multifaceted issue, and as we continue to study the effects of predation from non-native fishes, we must also consider how predation may be compounded by other sources, including the native wildlife that depend on fish as part of a healthy food web.
This post featured in our weekly e-newsletter, the Fish Report. You can subscribe to the Fish Report here.