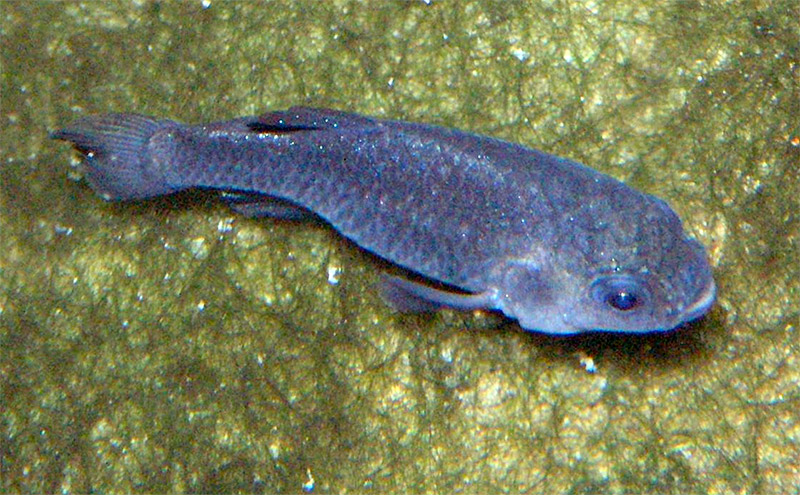 The Devils Hole pupfish (Cyprinodon diabolis) lives in the hot, alkaline, and low-oxygen waters of Devils Hole, Nevada, where the water can reach a scalding 34° C (93° F). Pupfish generally have a high tolerance for environmental stressors such as temperature (Shrode 1975), and the Devils Hole residents are no exception (see Fish in Unlikely Places). The tiny population of this species has fluctuated from hundreds (not exceeding 553 since surveys began in 1972) to just tens of fish (35 fish in spring 2013). It was classified as endangered in 1967 under the Endangered Species Act, and many events have threatened its existence, including a drop in aquifer levels in Devils Hole from nearby agricultural demands, earthquakes, and flooding. The population of the Devils Hole pupfish is strongly influenced by seasonal variables, such as primary production and sunlight. The short-lived species only lives for about a year, and the population tends to decrease by approximately 40-60 percent between fall and spring, due to a decline in food (e.g. algae) availability. The decrease in numbers between winter and spring is likely due to a loss of adults from starvation (Riggs and Deacon 2002).

Researchers monitor this species through biannual population estimates conducted in the spring and fall of each year.  In April 2013, the spring population estimate was a mere 35 pupfish, a drastic decline from the spring 2012 estimate of 63 pupfish.  Researchers continue to supplement the Devils Hole pupfish with food, as this may be a limiting factor for its population.  Additionally, research is being conducted on a hybridized form (a hybrid of Devils Hole pupfish and Amargosa pupfish) at the Fish Conservation Facility at Ash Meadows National Wildlife Refuge. The Fish Conservation Facility allows researchers to investigate relationships between environmental variables (e.g. food, temperature) and the health of the Devils Hole pupfish.

With the population of Devils Hole pupfish population being precariously low, a single event could result in extinction of this species. Small, isolated populations are in danger of being wiped out, either by low genetic diversity or catastrophic events, such as a loss of food supply due to earthquakes or flooding. Rising global temperatures may also have negative effects on the Devils Hole pupfish, as evidenced by research conducted by Heuton, Hillyard, and van Breukelen (2011) on the metabolic rate of hybridized pupfish acclimated to 33°C.  The researchers hypothesize that increases in water temperature may lead to the extinction of this species. While the Devils Hole pupfish can survive in the warm waters of Devils Hole for now, perhaps it’s living on the edge of its thermal tolerance.