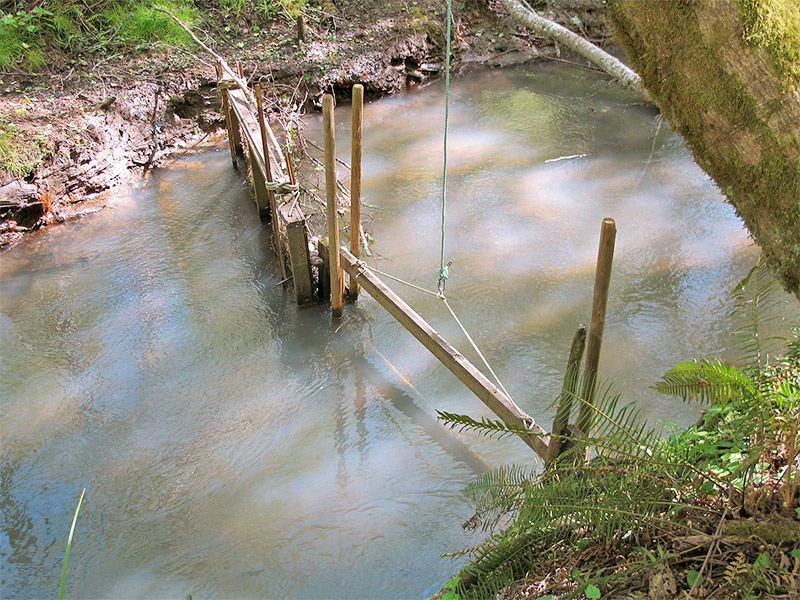 When embarking on a new project, it’s often wise to learn from the experience of others. That’s why FISHBIO staff recently headed north among the trees of Mendocino County for insights on how to monitor fish in coastal streams. Salmon and steelhead populations living in California’s coastal streams are listed under the California and Federal Endangered Species Acts, and their populations therefore require extensive monitoring and restoration efforts. One approach is life cycle monitoring, which is the combined process of counting juvenile fish traveling downstream and adults traveling upstream on the same river.

FISHBIO is currently working to create a decision-making tool that can be used to develop salmonid life cycle monitoring on Scott Creek in Santa Cruz County. This resource will help scientists identify the best type of life cycle monitoring equipment to use for a particular habitat, based on environmental characteristics such as depth, flow, and substrate. To inform our research, we paid a visit to a team from the California Department of Fish and Wildlife (CDFW) in Mendocino, who have monitored coho salmon and steelhead in northern coastal streams for many years. The researchers have set up three life cycle monitoring stations at Pudding Creek, the south fork of the Noyo River, and Caspar Creek. Their methods include rotary screw traps and fyke traps to monitor juveniles, and fish weirs and PIT tag antennas to track adults (Gallagher and Wright 2012).

One of the interesting things we learned is that researchers have more flexibility on a stream that is not considered a navigable waterway. The scientists can set up panels to divert most of the river into their rotary screw traps, without having to worry about blocking kayakers or rafters. This tactic greatly increases the traps’ efficiency, resulting in more captured fish to study. The team implants PIT tags into nearly all of the out-migrating juveniles, which allows them to gather valuable information about the fish that return as adults. For instance, the researchers have found that adult salmonids don’t tend to stray among the three coastal streams, even though their mouths are located within 10 miles of each other. Although the adult fish presumably mix in the ocean, they reliably return to the streams where they were born. We also benefited from talking to the CDFW team about their experiences operating equipment in an environment very similar to Scott Creek. They face the challenges of a flashy system that responds quickly to heavy rain, and also cope with a mess of equipment-clogging debris from the dense tree canopy. Check out this video for more information on CDFW’s life cycle monitoring on coastal streams.