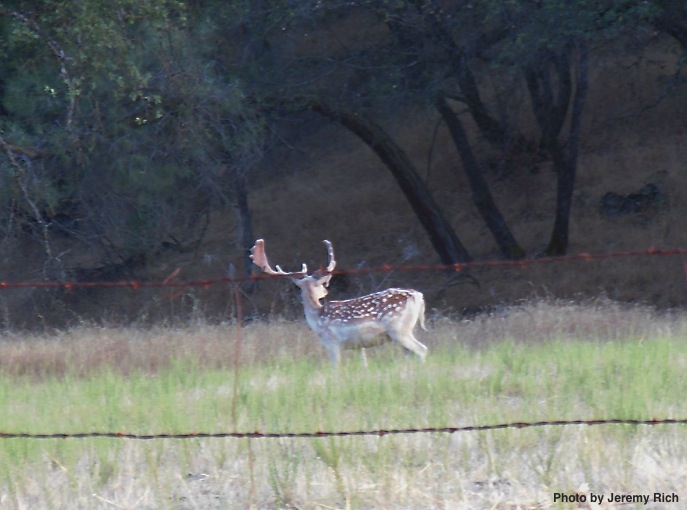 Recently, some local visitors stopped by our Oakdale office to let us know they had seen a deer near Yosemite National Park that did not look like any of the other deer in the area. Luckily, one of our fisheries biologists used to be wildlife naturalist, and was able to identify the species as a fallow deer (Dama dama). The very next day, a UC Davis student came by our office and showed us a picture of a fallow deer he had snapped near Oakhurst, CA (shown above).

The fallow deer is an ungulate belonging to the Cervid family that is native to western Eurasia, but was introduced to California in the late 1800s. As an introduced species, Fallow deer can have a disruptive effect on native tule elk and black-tailed deer. They compete for the same food source and can potentially transmit paratuberculosis to native ungulate species.

Fallow deer most commonly have a chestnut-colored coat with white mottles in the summer, and an unspotted coat in the winter. They also have a light colored area around the tail that is outlined in black; however, other color variations do occur. Fallow bucks (males) typical stand between 32-38 inches at shoulder height, and can range in weight from 130 to 220 pounds.

Currently, the largest known population of fallow deer in California is at the Point Reyes National Seashore, where park biologists are using fertility control methods to remove the non-native deer from the area.  The California Department of Fish and Wildlife issues a limited number of permits that allow private citizens to hold and posses captive fallow deer for a variety of purposes, including game farming and small private zoos. Sightings of fallow deer should be Reported the Department of Fish and Wildlife.