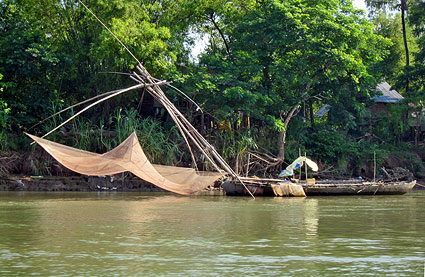 Throughout history all over the world humans have devised a variety of methods to catch fish. Although we may favor rod and reel with light line to maximize sporting value, most anglers are less concerned about sport and more concerned with feeding the family. While on a tributary to the Mekong recently we spotted this large Cantilever net, which are fairly common throughout Asia.  When fishing the net is allowed to rest on the river bottom for a few minutes, then raised quickly such that any fish swimming above the net are captured and brought to the surface. The net is raised with the aid of large rocks that function as counter-weights. The net typically catches small annual species that are dried in the sun and later eaten whole.

See a YouTube video of a similar fishing net in action.