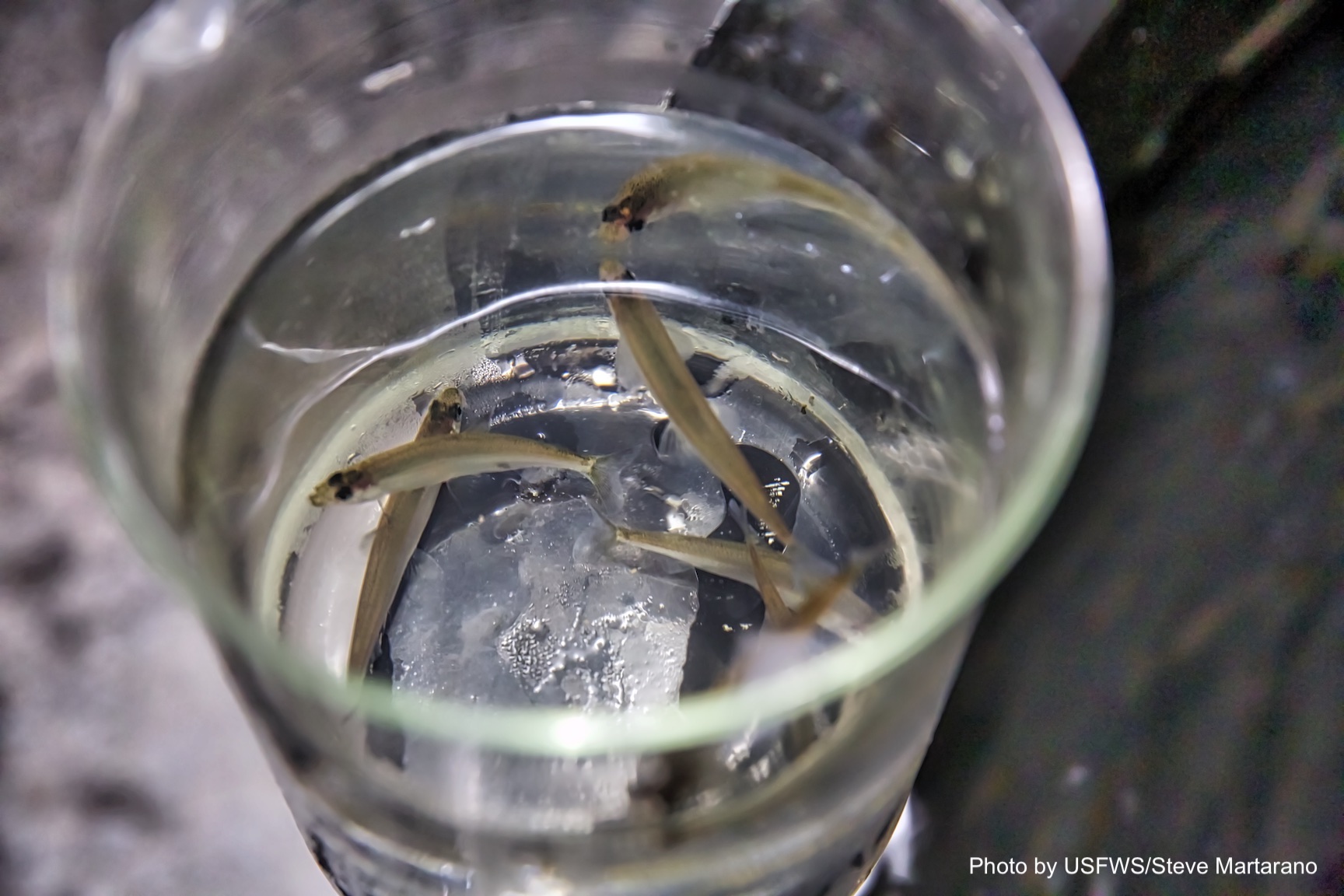 For little fish on the menu of countless hungry predators, staying alive often means seeking refuge in the company of their own kind. When prey species form a group or “shoal,” individuals are able to forage more efficiently and better evade predators. Shoal cohesiveness is strongly influenced by the energetic needs of its individual members, and this means temperature can play a large role in determining group structure and behavior. Climate-change driven warming of water temperatures has the potential to reduce the ability of fish to stick together in shoals, which could have major implications for ecological interactions like predation and competition. However, most studies of warming and fish behavior do not fluctuate temperatures to mimic what would occur in nature – namely increasing temperature during the day and decreasing it at night. To improve understanding about how rising temperatures may threaten federally endangered delta smelt (Hyposemeus transpacificus), an experiment using hatchery-reared individuals was conducted to assess the effects of different temperature treatments – including one that fluctuated from day to night – on behavior and predator avoidance (Davis et al. 2019). The findings suggest that warming threatens to have a significant impact on these tiny forage fish, and that considering naturally occurring temperature fluctuations is important in determining the severity of this impact.

Delta smelt are known to be sensitive to increases in water temperature, but little is known about the effects of increasing temperature on behavior and predator avoidance. Thus, the goal of this study was to characterize both individual and group behavior and to determine whether rising temperatures increase the risk of predation. Specifically, the team sought to evaluate the effects of elevated and variable temperatures on individual and group behaviors, response to predator cues, and predation rates by largemouth bass (Micropterus salmoides). Different groups of fish were exposed to three temperature treatments, including a control (~63˚F), a fluctuating treatment simulating a natural warming-cooling cycle (~64˚F to ~70˚F), and a warm water treatment (~70˚F). The researchers also assessed predation on three species assemblages: delta smelt shoals, mixed species shoals of delta smelt and Mississippi silversides (Menidia beryllina), and silverside shoals.

Using video monitoring, the researchers evaluated baseline behavior, the behavior of fish exposed to alarm cues from a dead delta smelt, and the behavior of fish exposed to predator alarm cues from largemouth bass. In addition, predation trials that introduced largemouth bass to the enclosure were conducted for each of the species assemblages. The researchers analyzed the movement of individual delta smelt with specialized software and found that smelt in the fluctuating temperature treatment exhibited the same swim speed as those under the cooler control treatment, but that smelt exposed to the consistently warm treatment significantly increased their speed to 75% of their maximum swimming capacity. Notably, the fish in the warm treatment also exhibited a heightened response to alarm cues and did not recover to normal behavior after these cues were introduced. This means the smelt in warmer water were exerting more energy for a longer amount of time. The smelt shoals in consistently warm conditions were less cohesive and often broke into smaller groups. The predator trials showed that temperature also ramped up predation by largemouth bass, with smelt in the warm treatment experiencing higher mortality. Although largemouth bass preferred to prey upon silversides when they were present, delta smelt mortality still increased under consistently higher temperatures.

This foundational study in swimming characteristics and group dynamics of delta smelt revealed that although increased temperatures had substantial effects, fluctuating these temperatures in a manner more reflective of natural conditions appeared to reduce the impacts. The smelt experiencing continuously warm conditions exhibited inefficient energy use and fragmented shoaling behavior, which could put them at heightened risk of predation. This effect may be worsened by the fact that largemouth feeding efficiency has been shown to increase around 70˚F (the temperature of the warm treatment). Had natural temperature fluctuations not been included in this study, the results may have led to drastic over-estimations in delta smelt behavioral response and predation risk. However, the authors note that climate projections for the San Francisco Estuary indicate that daily temperature cycles will have higher, longer-lasting peaks, and that daily minimum temperatures will decrease in duration. In light of this, future studies of smelt behavior using temperature cycles predicted by climate change models may be valuable to further evaluate the ability of these fish to cope in a warming world.