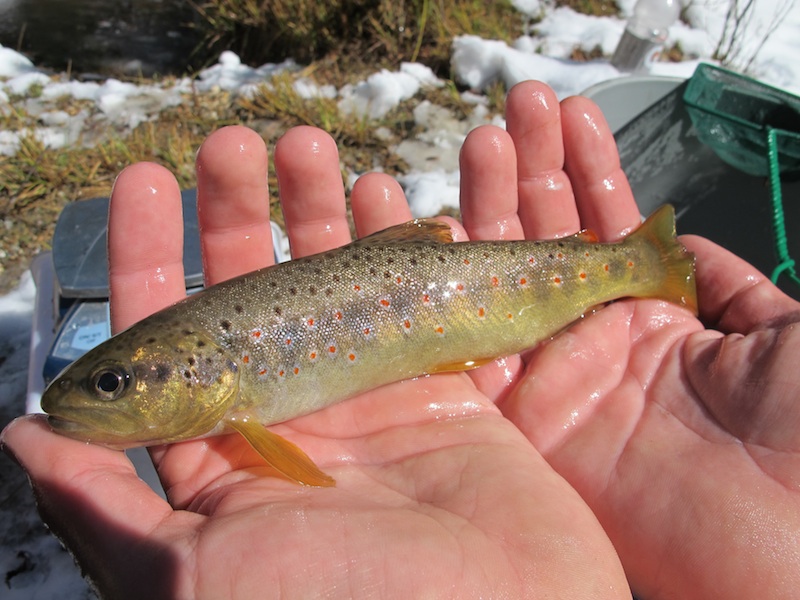 Recently, FISHBIO technicians preformed stream assessments in the Sierra Nevada Mountain range near Shaver Lake (see Come Sun or Come Snow). A component of these stream assessments included electrofishing in the South Fork San Joaquin River. This sampling method allowed us to safely handle brown trout (Salmo trutta) and rainbow trout (Oncorhynchus mykiss). We don’t normally have many opportunities to interact with brown trout in our local waterways, so we were intrigued by this rather uncommon encounter.

The brown trout is a non-native species found in California waterways that is believed to have been introduced around 1893. Their native range includes parts of Europe, North Africa, the Middle East, and parts of Asia. Because of its popularity as a game fish, they are now distributed globally via aquaculture production and fish stocking programs. Due to their high level of adaptability, such as their ability to withstand higher water temperatures than other fishes, they are considered to outcompete several native trout species.

Brown trout and rainbow trout happen to fill a similar niche in their respective environments. Aggressive interspecies behaviors have been observed between juveniles of similar size classes. However, the two species are able to cohabit the same area because they tend to prefer different areas of their environment. Rainbow trout aggressive behaviors are better suited to faster-velocity habitats, and brown trout displays are better suited to slower-velocity habitats. In the Sierra Nevada, it also seems as though brown and rainbow trout are adapted to complementary niches.