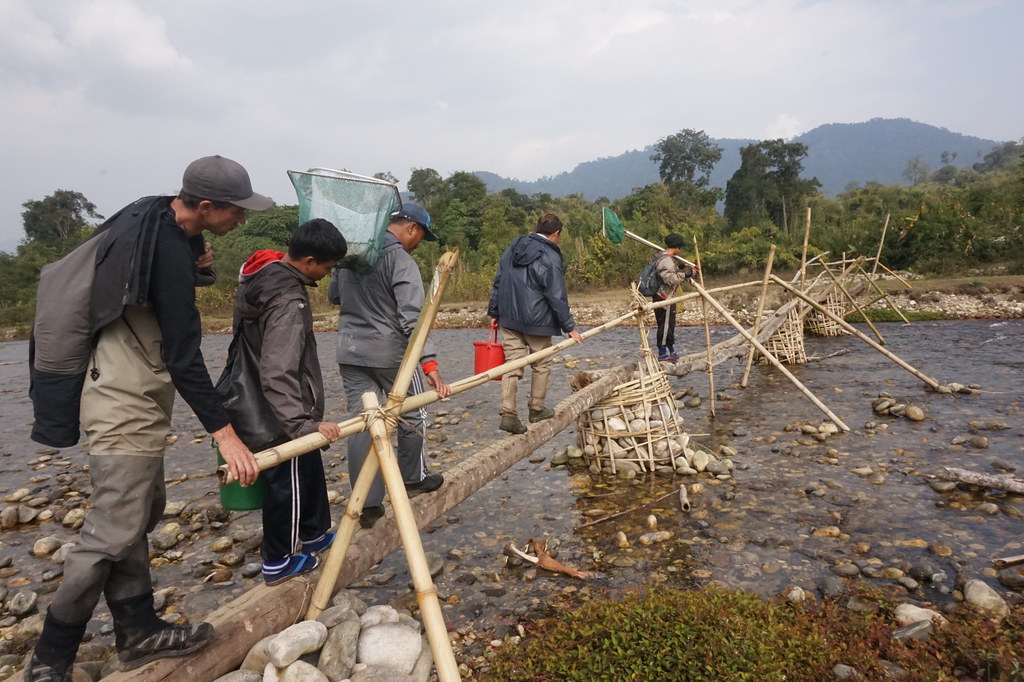 In February 2016, FISHBIO staff joined an expedition to some of the remotest villages in northern Myanmar on a mission for fish conservation. Today, we’re excited to release a documentary about that trip of a lifetime. Our new film takes viewers deep into Myanmar’s mountain forests at the base of the Himalayas to explore the undeveloped headwaters of the Irrawaddy River. The project is led by the conservation organization Fauna & Flora International (FFI), which is working to help local communities protect the region’s unique freshwater fish. FFI requested FISHBIO to advise the establishment Fish Conservation Zones in Myanmar villages, similar to our projects in Laos, and also to assist with electrofishing surveys to study fish diversity in Phonganrazi National Park. The result was an unforgettable adventure.

The film follows Erin, FISHBIO’s communications director, and Jeremy our fabrication expert, as they trek with FFI’s team to far-flung villages located amid steep and rugged mountains accessible only by foot. The journey covered 60 miles and up to 3,500 feet in elevation. Along the way, they crossed many rickety bamboo bridges, passed a variety of mountain villagers carrying supplies to and from the nearest town, and visited rural schools to distribute pens that FFI had brought as gifts. They stayed with families in traditional wooden houses, ate lunches of rice wrapped in banana leaves, and slept by the family fire pit to keep warm. In each village, FISHBIO and FFI met with villagers to discuss the concept of fish conservation zones and map out areas of the river that the communities wanted to protect. They heard stories of village elders describing how fifty years ago, the streams teemed with fish, stacked “layer by layer.”
Electrofishing surveys with FFI gave our team the chance to see some of those fish up close. Many of these mountain fishes are small and unusual, some with wing-like fins or suction cup-like appendages that help them cling to rocks amid rushing rapids. We even encountered a beautiful striped loach of the genus Schistura that taxonomists working with FFI have identified as new to science. But as we discovered, even the smallest or most beautiful fish are worthy of eating in a place where people live right at the edge of nature, and get much of what they need from the wild. The same electrofishing methods used for science are also illegally used for harvesting, and according to the villagers have caused serious declines in the fish populations. We hope that village Fish Conservation Zones managed in partnership with the state fisheries administration will help give the communities the authority to protect their local fish populations. Since FISHBIO’s trek through the mountains, FFI has continued to work with the same villages and several more, as well as government officials, to ensure that fish conservation zones become officially established. Seven FCZs have now been established among the Phonganrazi villages, including three visited by FISHBIO. The villages now have signs installed that list the FCZ regulations, and a law enforcement workshop will take place later this month to train local communities in how to enforce those regulations, as well as inform local government authorities. We hope this documentary can help bring awareness and appreciation for protecting Myanmar’s remotest river habitats and unique freshwater fishes. Watch the film now to let the journey begin!
This post featured in our weekly e-newsletter, the Fish Report. You can subscribe to the Fish Report here.