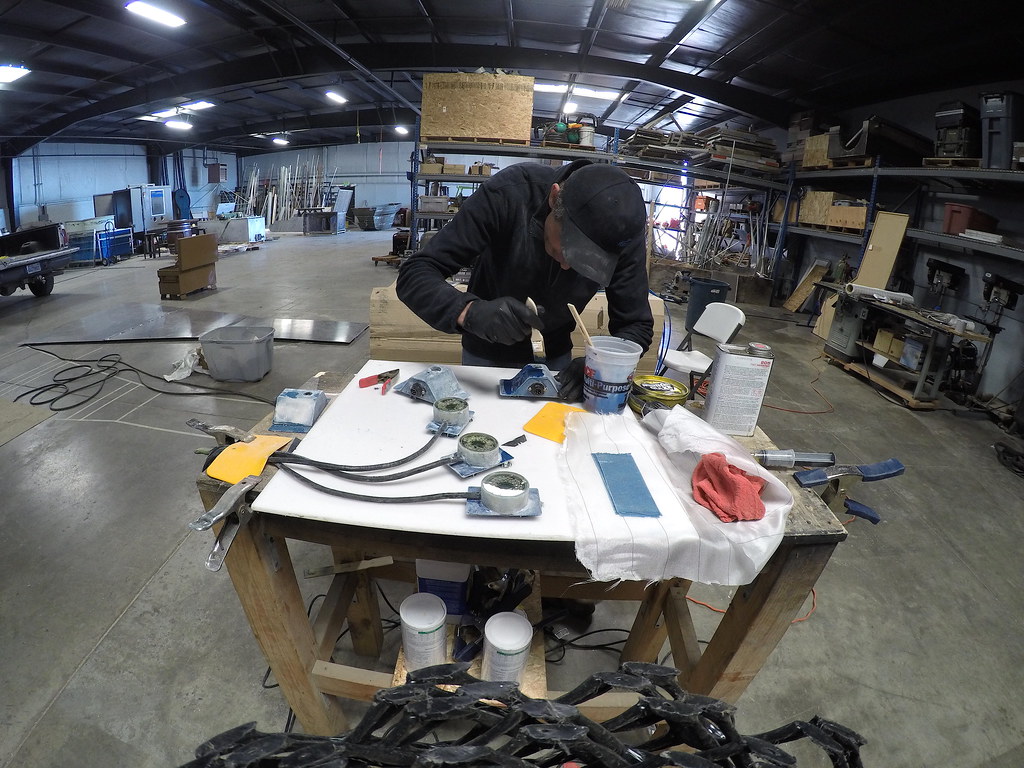 At FISHBIO, we specialize in both counting fish and building things. This naturally led us to construct our own automated video system for monitoring fish passage, called the Smolt Spy. Using video to record fish passage at structures like dams and weirs has been around since the days of using VHS tapes for recording. As fisheries biologists, we are always looking for improved ways to collect fisheries data. Today, smaller cameras, better lighting options, and software that speeds up the review process have led to big improvements in video monitoring technology. Recent advances allow us to manipulate the video image resolution, set the frame rate, and switch from color to black-and-white video for recording at night under infrared lighting to create equipment tailored for various applications.
Using video to monitor fish passage requires customized equipment for each situation because there aren’t any turnkey systems available in the marketplace. Our FISHBIO techs have fabricated several video-monitoring systems to count adult and juvenile fish passages over the years. The Smolt Spy is our first custom video-monitoring system, which we originally designed and built for the Summit Lake Paiute Tribe to monitor Lahontan cutthroat trout in Mahogany Creek. It consists of a fish-passage tunnel equipped with a single digital camera and infrared lighting. We used a variation of this system in conjunction with a fish-counting weir to enumerate adult Chinook salmon moving upstream and downstream in the Tuolumne River. This set-up used an overhead camera to count fish moving through a square passageway, and two underwater side cameras to identify fish species and physical attributes, like sex and clipped adipose fins that signify hatchery-origin fish. We have even custom-fabricated a video monitoring system to fit within an existing fish ladder, complete with four cameras and infrared lights.

Our latest video monitoring installation is another Smolt Spy system designed to record outmigrating steelhead smolts in the Carmel River watershed. California American Water owns a device called a Behavior Guidance System in the Los Padres Reservoir at the dam spillway, which is a floating structure made of booms with fish curtains that guide outmigrating steelhead smolts into a floating surface collector. This then sends the fish through a bypass that functions like a water park slide, transporting fish downstream past the dam and back into the Carmel River. This Smolt Spy system consists of multiple cameras and infrared lights mounted inside the surface collector to record steelhead smolts moving through the apparatus on their journey downstream. For this setup, we had to custom fabricate camera housings with a low profile so they could shed debris and not impede fish passage. We encapsulated the digital cameras within a fiberglass housing so they protrude less than two inches from the passing chute walls, and also made waterproof infrared lights in the same manner. Fiberglass is versatile and can be made into any shape, but it is also time-consuming to work with, and the camera is no longer accessible once it is sealed inside the housing.
The Smolt Spy camera systems utilize Internet Protocol (IP) digital cameras that are operated with a computer and software, and have much higher resolution than closed-circuit television (CCTV) security cameras, which are often used for monitoring. We set up an independent network with an Ethernet switch to power the cameras and send digital videos to a computer. The number of cameras that we can operate depends on the resolution of the cameras and the frame rate of recording. A computer with a powerful processor and graphics card makes it possible to use more cameras. Digital video does require a lot of hard drive space for saving the videos, but fortunately portable hard drives have become less expensive, allowing us to record to external drives that can be swapped out every week or two. The videos on these hard drives can then be reviewed by a trained fisheries technician to quickly identify and count fish.
The biggest advantage of the Smolt Spy system is its motion-activated feature. As long as the camera field of view has a consistent background without water turbulence and light reflections, motion-activated video clips will accurately record passing fish as small as 50 mm. Only recording video when fish are passing greatly cuts down the amount of video that needs reviewing. While there can be challenges with turbidity and debris interfering with the motion-activated recording, the Smolt Spy system effectively provides a means to passively count small and large fish that eliminates the need to trap and handle endangered species. Watch our video to see the Smolt Spy in action, and contact us to find out if this technology is a good fit for your project!