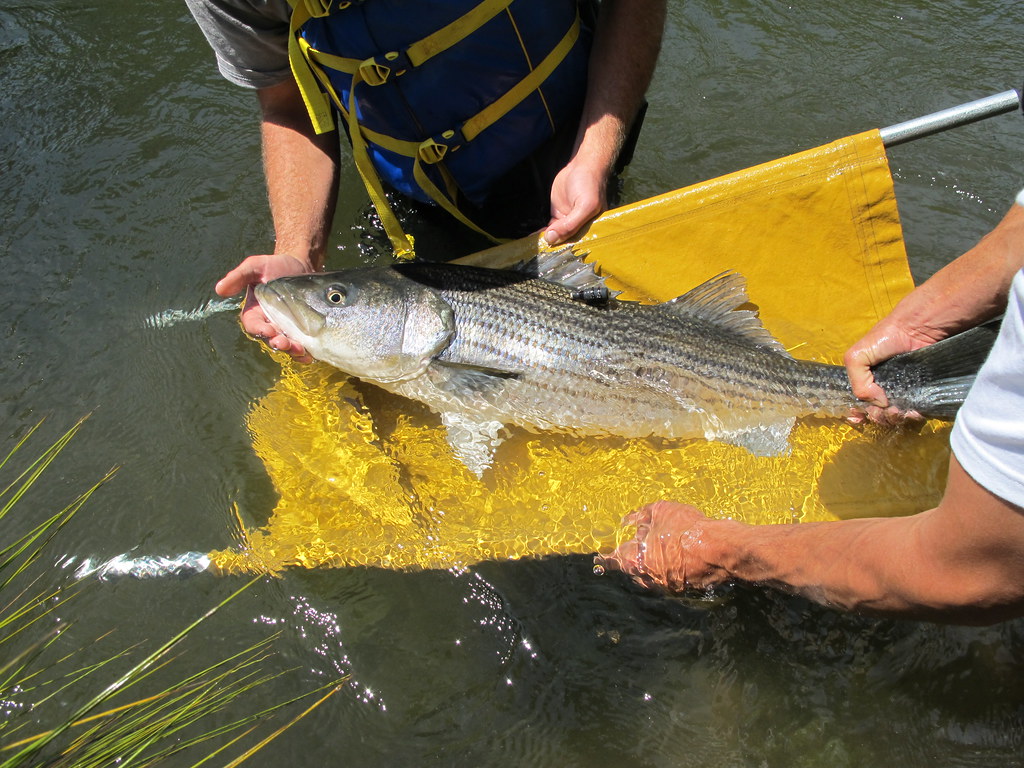 Just like M tracks James Bond across the world after implanting a chip in his arm in the remake of Casino Royale, so can biologists track fish moving through rivers and the ocean. Biotelemetry  works by implanting fish with a tag that transmits a signal, which is then picked up by receivers (either hand-held or autonomous). Tags either operate passively (like PIT tags that a veterinarian might put in your pet) or actively (like telemetry tags that constantly emit a signal). Biologists can then follow a fish by comparing where and when receivers “hear” the signals from their tags, and use these data to estimate things like migrating fish speeds and survival rates, habitat use, and interactions with other species (such as predator-prey interactions). Telemetry research has been occurring in the Sacramento-San Joaquin Delta since 1964, but continuous advancements in tag technology have helped the field increase exponentially. FISHBIO recently attended the “Informing Delta Management Using Biotelemetry Symposium” in Davis, California, which brought together researchers and managers to discuss the results from recent telemetry research in the Sacramento-San Joaquin Delta, and use this research to help better design future studies.
Telemetry studies in the Delta often focus on factors such as migration speed and predator abundance, which affect the survival rates of out-migrating juvenile salmon. Lately, however, research has also expanded to other species such as white and green sturgeon, as well as predatory species. Researchers have long known that survival of juvenile salmon from their natal streams in the Central Valley to the Pacific Ocean is very low thanks to coded wire tags. However, recent telemetry studies presented by UC Davis show these survival estimates can be highly variable, from as low as 0 percent to as high as 57 percent, within the same migration routes over time for juvenile spring and fall-run Chinook salmon. These studies also show that areas with the highest mortality rates in a river shift from year to year, suggesting mortality is related to the movement or migration of predatory fish rather than stationary threats such as water pumps. Researchers from UC Davis have also found a mixture of juvenile and adult green sturgeon occupying the south Delta almost year-round, from March to December (the length of the study), which is much longer than previously thought, and found adult white sturgeon residing in the Yolo Bypass from October to May, which is also much longer than expected.
Research in the Delta and its tributaries has also focused on predatory species, such as striped and largemouth bass. Researchers from University of Washington captured, relocated, and then tracked individual predatory fish up to 2 km away in the San Joaquin River to see if they would return to their original location. Of the four species tracked (striped and largemouth bass, and channel and white catfish) almost all individuals returned to their original location, and did so in an average of 3.4 days. Striped bass showed the fastest return times, with one individual returning within half a day. A movement study of predatory species into and out of Clifton Court Forebay presented by the California Department of Water Resources found the fish to be highly mobile. About 35 percent of fish tagged in Clifton Court moved out of the area, with the majority of those being striped bass, and 27 percent of the tagged predators left but then returned and were recaptured in Clifton Court. Combined with this predator study, researchers also examined the diets of 1,315 striped bass and found about 20 percent of the individuals had consumed native fish species (e.g., Chinook salmon, white sturgeon, Delta smelt, steelhead), and of these predators most were sublegal harvest size (<50 cm fork length). The symposium confirms that recent advancements in telemetry are helping shed new light on a wide range of species movements and behaviors, whether fishes, pets, or (maybe one day) secret agents.
This post featured in our weekly e-newsletter, the Fish Report. You can subscribe to the Fish Report here.